Helpline should be in place for early new year, when abortion services are due to begin 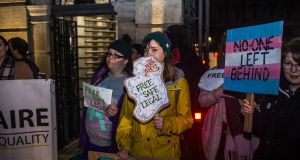 Women gathered at the Dáil earlier this month to demand the right to free and safe legal abortion. Photograph: James Forde

The Government is finalising arrangements for a 24-7 helpline for women to receive counselling and clinical advice for abortion services starting in the new year.

The service will provide advice on how to access free face-to-face counselling and clinical guidance.

Funding is also being provided by the HSE for a series of educational sessions for healthcare staff who will be providing abortion services. These sessions are expected to begin next Monday.

The Regulation of Termination of Pregnancy Bill is due to return before the Dáil this week, where TDs are expected to debate and vote on issues such as conscientious objection. Sinn Féin is understood to favour holding a late-night sitting on Wednesday in order to ensure the legislation passes in time to reach the January target date.

It had been hoped that the Bill would have moved into the Seanad this week but lengthy contributions from TDs on both sides of the debate have delayed its passage through the Oireachtas.

However, Government sources say that a number of key developments are to be announced.

The secretary-general of the Department of Health has issued a notification to the deputy director general of the HSE stating the service should be available in all 19 maternity units from the outset and has sought plans from each hospital group.

The HSE is providing resources to enable the Irish College of General Practitioners and the Institute of Obstetricians and Gynaecologists to invite the WHO to provide a week of educational sessions on ethical issues in Dublin, Cork, Galway and Limerick.

Sessions are due to start on December 10th and will be made available to all staff who will be providing a termination of pregnancy service from January 1st, across community and hospital settings.

It is also understood that the medical colleges are continuing to develop clinical guidelines for termination of pregnancy. The aim is to have those ready in time for the roll-out of services from January on. Those guidelines will be kept under review, sources say.

Concerns have also been raised in recent weeks about the availability of anomaly-scanning machines.

It is understood that 14 out of 19 maternity units can now offer anomaly scans, up from seven in 2017. This was achieved through a targeted investment in ultrasonographers in the 2018 budget.

Recruitment and training for the remaining five hospitals is under way, with the aim of having anomaly-scanning offered to all women in all maternity hospitals during 2019.

The new law will provide for a termination where there is a risk to the life or serious harm to the health of a pregnant woman; where there is a fatal foetal abnormality; or where the pregnancy has not gone beyond 12 weeks.

Only five amendments have passed to be included in the law so far, all originated by the Government, including changing the review period of the legislation to three years instead of five and dropping the requirement that the doctor who certifies a woman for an abortion must be the same one who performs it.