Families in transitional housing welcome commitment they will not be evicted 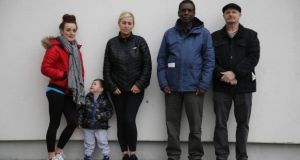 Stephanie Yeates and her son and Carter; Catherine Smith; Ismail Olujoog; and Cllr Brian Leech were at risk of being evicted from transitional housing in Tallaght, Dublin. Photograph: Nick Bradshaw

Families in transitional housing who were at risk of eviction have welcomed a commitment from Minister for Housing Eoghan Murphy they will not be evicted.

Túath Housing had written to families in Tallaght Cross telling them they would have to leave at the end of an 18-month stay. The housing body has managed 65 apartments on behalf of South Dublin County Council since mid-2016 as transitional housing for homeless families.

The families there had been counted among the monthly homelessness figures but earlier this year were among 1,600 people recategorised as “accessing homeless services”. They were removed from the statistics as they were in “own-door” accommodation.

Defending the recategorisation in October, Mr Murphy said the families were at “no risk of going into emergency accommodation”.

However, as these apartments are designated “transitional”, families cannot stay longer than 18 months as after that they may claim tenancy rights.

Túath had referred the cases of service-users who were ‘over-holding’ following notices to quit to the Residential Tenancies Board (RTB). It had made determinations in Túath’s favour. The next step would be an eviction order from the Circuit Court.

The families would then have to present as homeless and rejoin the homelessness figures.

Following media reports, Mr Murphy told the Dáil on Thursday: “The housing provided for these families has been a very secure source of accommodation for them over an 18-month period. A commitment has been given that no family will be evicted into homelessness from emergency accommodation.”

Catherine Smith (36), mother of two girls aged 13 and three, had been issued with a notice to quit by October 12th, in August. She was taken to the RTB in November.

Welcoming the news her family would not be evicted she said however she wanted assurances she would not be forced to move away from Tallaght where she attends college, her children goes to school and her father, for whom she cares, lives.

Local councillor Brian Leech is working with eight affected families and welcomed the Minister’s “row-back”. He wants assurance no further cases would go to the RTB.

Sinn Féin housing spokesman and local TD, Eoin Ó Broin, also welcomed the development and called on Minister Murphy to urgently address “the underlying issues that have given rise to this problem”.