Mayo priest to be exhumed in step towards canonisation 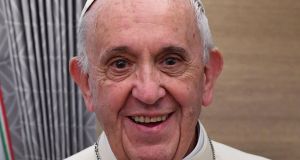 Pope Francis: towards the end of 2017, he named Fr Patrick Peyton as Venerable in recognition of his “heroic virtue”. Photograph: Ettore Ferrari/AFP/Getty Images

Relatives of an Irish-born priest who drew millions to his worldwide Family Rosary rallies in the 1940s and 1950s have confirmed his body is to be exhumed as part of a process which it is hoped will lead to his canonisation.

The exhumation of Fr Patrick Peyton from a grave at Boston College where he was interred in 1992 is likely to take place before summer, according to one of his nephews, Tommy Peyton.

Mr Peyton, a garage owner, lives in Attymass, Ballina, Co Mayo, the parish from which his charismatic uncle emigrated to the United States before becoming a priest in the 1920s.

Fr Peyton, whose famous rallying call was “The family that prays together stays together”, staged massive Rosary rallies all over the world including Ireland.

Late last year, in recognition of his “heroic virtue” Fr Peyton was named as Venerable by Pope Francis.

This is one of the final stages in the lengthy process towards beatification.

As Fr Peyton moves closer to becoming a saint, his body is to be exhumed prior to an examination by medical professionals to officially identify the remains, report on their condition, and collect relics.

Details on the time and location of the exhumation are not being released.

Tommy Peyton, one of the priest’s six nephews and two nieces, says he believes the exhumation at Boston College will take place before June.

The remains are expected to be reinterred at the Holy Cross headquarters – the order to which Fr Peyton belonged – in New York.

In recent years, the Fr Peyton Memorial Centre was established in Attymass. It attracts thousands of pilgrims and visitors every year.

Attymass resident John O’Hara, a member of Mayo County Council, said on Monday everyone locally was excited at the prospect of their famous predecessor becoming a saint: “It [sainthood] would be good for Attymass and for north Mayo.”