Accommodation lost: Families now ‘in a caravan at dump site’ 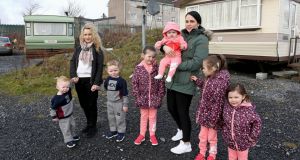 Vanessa Barrett (L) with her sons MJ and Patrick, and her sister-in-law Samantha Barrett with her daughters Kaitlyn, Makenzie, Sinita and Noriah. Photograph: Joe O’Shaughnessy

Three young families, including eight young children, remain living on waste ground without electricity, running water, toilets or rubbish collection despite repeated commitments by Galway City Council that their situation will be addressed.

Two of the families lost their private-rented accommodation after their landlords went into receivership, while Jimmy and Rachel had to move out of Jimmy’s parents’ home due to overcrowding.

The site is unsurfaced with large potholes full of water. Rocks, rubbish, old cans, wires, glass and other debris are scattered around the perimeter.

The families cannot allow their children out of the mobile homes to play for fear of injury. They use bathrooms in their parents’ homes, about a five-minute walk away.

Sinita Barrett is profoundly deaf and has a rare genetic disorder, Galactosemia, which causes speech and learning difficulties. She had cochlear implants surgically implanted when she was three and she requires specialised speech therapy at home.

“She has a lot of hospital appointments in Dublin and here in Galway,” Samantha says. She shows the battery-charger for the implants.

“But because we have no electricity we can’t charge them here. We have to go to Stephen’s mother’s house.”

The lack of space in the small, mobile home also means Sinita’s speech therapist cannot have time with her, at home, in a quiet room.

A letter, dated August 12th, 2014, from Beaumont Hospital’s cochlear implant department to Galway City Council, says Sinita’s housing situation, “in a caravan at a dump site ... poses a significant risk for Sinita both in her acute recovery phase following surgery and going forward into the future ... to the damage of her cochlear implant and equipment”.

The family of six sleeps in one room – four in one double bed and two of the children on a mattress on the floor. The mobile home is cold and the couple say it is “impossible to keep warm”. Cracks in windows are taped over.

Patrick, Vanessa (who is pregnant and due to have her third Caesarean-section on Wednesday), and their two children share one bed.

“Patrick lies with his back against this wall,” Vanessa says, pulling the bed out to show black mould scarring the wall. “He lies there to protect us against the damp.”

The families, who bought their own mobile homes, say they have tried and been unable to get private-rented accommodation. They say they would pay rent if electricity, toilets and portaloos were provided.

In correspondence dated December 20th, 2017, to independent Senator Trevor Ó Clochartaigh, the council’s housing and social inclusion department says: “The families on the site at Doughiska have been in illegal occupation of this site ... it is not a designated halting site.”

A named approved housing body is in the process of making a submission to build homes on the site, three of which will be offered to the families, but these “will not be available for a minimum period of 2-3 years”.

On January 24th, Senator Ó Clochartaigh was told while waste and pest control service would be provided “shortly”, the costs of providing other services “are excessive for what may be a limited time period”.

Figures published last week show Galway City Council was allocated €209,000 for Traveller accommodation in 2017. Of this allocated fund, €95,102 was spent.

Galway City Council did not provide a comment to The Irish Times.