Tributes paid to campaigner Laura Lee after her sudden death 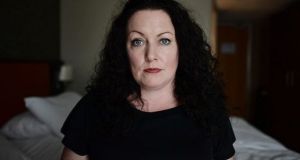 Tributes have been paid to Dublin woman Laura Lee, a prominent campaigner for the rights of sex workers, following her sudden death.

Ms Lee, who was about to embark on a legal challenge against a law in Northern Ireland which makes it illegal to pay for sex, died on Wednesday, her daughter Cat announced.

She wrote: “My mum unfortunately passed away on Wednesday 7th February 2018. She asked me to let you all know that she was so grateful for everyone’s support.

“I ask you to continue all of your amazing campaign work in her honour. I’m so proud of all my mum accomplished in her tragically short life. My family have asked for complete privacy at this difficult time. Much love & power to you all.”

Ms Lee had been granted the right to challenge the recently introduced law in the North which makes it illegal to pay for sex. The case is due before Belfast High Court later this month.

Ms Lee, a law graduate, had said she was prepared to go to the European Court of Human Rights to challenge the law, which she and fellow sex workers claimed discriminated against their rights to privacy, to earn a living and physical protection.

In a 2015 interview before the law was passed by the Northern Ireland Assembly, Ms Lee said: “I am doing this because I believe that when two consenting adults have sex behind closed doors and if money changes hands then that is none of the state’s business. The law they have introduced has nothing to do with people being trafficked but simply on their, the DUP’s, moral abhorrence of paid sex.”

Ms Lee lived in Edinburgh but also travelled to Belfast and Dublin to work. She had also pledged to challenge a similar law introduced in the Republic last year with the passing of the Criminal Law (Sexual Offences) Bill 2017.

“We are deeply saddened by the death of our client Laura Lee. Laura courageously fronted a campaign and judicial review which sought to defend and protect thousands of sex workers who do not have a voice,” Mr Moynagh said.

“In the face of much opposition she maintained great dignity. Laura Lee will be remembered as one of this country’s most fearless human rights advocates and we are committed to continuing her work.”

In a statement, the Sex Workers Alliance Ireland (SWAI) said its members were “heartbroken and devastated at the loss of our dear friend, colleague and SWAI board member Laura Lee”.

“Our hearts are with Laura’s family, friends and all who knew and loved her. Laura’s bravery was unending,” the organisation said.

“She believed passionately in justice and was fighting for every single sex worker in this world. Her dedication and commitment to our struggle has made a huge and lasting impact, and she will never be forgotten.”