Papal Nuncio apologises on behalf of Pope for ‘discouragement and disappointment’ 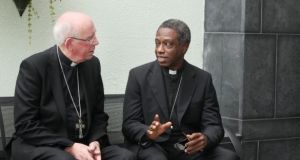 The Papal Nuncio to Ireland has apologised, on behalf of the Pope, for creating, what he described as “discouragement and disappointment” in the Catholic Church.

Opening the Festival of Faith Conference in Galway on Saturday morning, Papal Nuncio, Archbishop Jude Thaddeus Okolo also criticised the media for reporting only negative stories about the Church.

He said discouragement and disillusionment amongst followers of the Church was not a new thing and that Catholics were denying their faith out of fear of being branded conservatives and traditionalists.

He then issued an apology on behalf of the Pope in the form of a prayer.

“One of the first things I want to do here today, on behalf of the Holy Father is to close my eyes and say I am sorry. We are sorry; for creating the disappointment. Just like Peter, who wept bitterly, I’m saying we are sorry. I am sorry for whatever discouragement and disappointment we created for you. May the Lord forgive us, amen,” he said.

The Papal Nuncio went on to say he had been a journalist before becoming a diplomat and he knew how the media worked, accusing it of concentrating on negative stories about the Church.

He said he had attended a ceremony in Derry last Monday, where 564 teenagers were given awards for what they had accomplished in their communities. “They (the media) will not tell you about that because it does not make news. I know what I’m talking about. If somebody fell down dead right here, now that would make the news,” he said.

He said people, like the prophet Isaiah, needed to rise up and stoke the embers of their faith by saying “here I am Lord”.

“Maybe this time the ladies will be given a chance. Who will be the Isaiah among you? My own faith came from an Irish priest in Nigeria. We need to re-ignite the embers of faith into a fire. Who has the courage to do it?”

But, he warned, when people try to rise up “the press will strike you down”.

“I too am a journalist. I understand it. They will just pull you down and criticise you and then go to your files and see if there are some ghosts in the cupboard. “It’s true, and then you are afraid. Don’t be afraid,” he said.

The Papal Nuncio said there were so many reasons in the world today to cause people to lose hope.

“I’m not going to talk about a referendum. I’m not going to talk about a world with no families. I’m not even going to mention the possible visit of the Holy Father. No, those are not my themes. I will stick to mine and that is to raise hope. “Others will follow who will speak about that. Also, I’m an ambassador. I’m a diplomat. There is an international law. It means that an ambassador should not get embroiled in such affairs. So, if I do not talk about the referendum, do not think that I’m being negligent. You yourselves will discuss it here today,” he said.

He told the more than 250 delegates at the conference that many people felt disillusioned with the world today. Some were disappointed with the Church, the State and politicians and they had lost confidence and patience with their priests, their parents and with society.

He urged Catholics to put God first and, in doing so, they would find happiness and hope again, he said.

The Festival of Faith Conference, entitled ‘Raising Hearts and Giving Hope’, coincides with the installation ceremony of Fr Brendan Kelly as the new Bishop of Galway on Sunday.