Campaign to keep Eighth Amendment ‘has not started yet’ 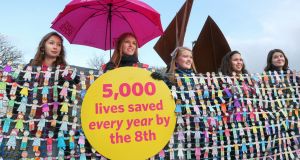 Some of the attendees at the LoveBoth Project’s ‘Lives Saved’ event at Eyre Square in Galway. Photograph: Joe O’Shaughnessy

The campaign to keep the Eighth Amendment “has not really started yet”, the spokeswoman for a new anti-abortion “information roadshow” has said.

Katie Ascough, of the LoveBoth Project, said the task of those who do not want the Eighth Amendment of the Constitution, also known as Article 40.3.3, repealed will be to inform people of the “true implications of losing it”.

She was speaking on Friday in Galway’s Eyre Square, where LoveBoth held the first of a rolling series of events in its “Lives Saved” roadshow. The events will be held in urban centres across the State until the referendum on the proposed repeal of the Amendment is held.

The group says the events will highlight the number of people alive today who would not be if abortion had been legal in the State.

Article 40.3.3, inserted into the Constitution following an 1983 referendum, guarantees to protect the life of both the mother and the unborn equally, as far as is practicable.

According to LoveBoth, since 1983 some 100,000 people have been born who would not have been were it not for the Amendment. They say some 4,700 such people were born in the Galway region, and that the number of locals “saved by Eighth” will be highlighted in each region the roadshow visits.

Ms Ascough said the prevailing narrative was that the Eighth Amendment would most likely be repealed in the forthcoming referendum. However, she did not accept this as a foregone conclusion.

“If you look at the opinion polls, I can see why people might be of that view. But it’s very early and the campaign to keep the Eighth hasn’t really started yet. This is the first day of this national information roadshow and we have had a good reaction. People have stopped and asked us questions, engaged with us.

“What is critical over the next few months is that we have a respectful and even debate. I am confident that once people become informed of the facts and the implications of losing the Eighth, people will be persuaded to keep it.”

She added: “Just one in six people know that one in five pregnancies in the UK end in abortion.

“Only 10 per cent of people know that 90 per cent of babies diagnosed with Down syndrome before birth in the UK are aborted. So we believe there is huge scope to argue our case and win in our campaign to keep the Eighth.”

The roadshow will visit further locations across the State from next week, the LoveBoth Project said.