Mary’s story: Roscommon woman believed a lifetime of exile was as it should be

Pregnant woman pleaded with God to take her, but he too seemed to have abandoned her 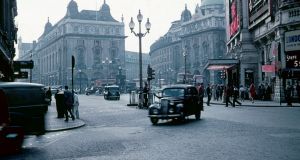 London’s Piccadilly Circus in the 1950s. When Mary arrived in the city from rural Co Roscommon, pregnant and with her fiance, it was the first time either had ever been abroad. He soon left her and her unborn son to fend for themselves. Photograph: iStock.

Her name was Mary, and she was with child.

It was the 1950s when she arrived in London with her fiancé. They had left Ireland because of her pregnancy. From rural Co Roscommon, neither had ever been abroad before.

Both got jobs, she in a branch of WH Smith on Oxford Street. Soon he was gone. He was not prepared to share in her situation any longer, regardless of his part in it, so he fled to the United States.

Mary was in despair, forsaken. One day she lay down in a park, her swollen belly obstructing the sun, and begged, pleaded with God to take her and the baby. He didn’t. As she said herself years later, it seemed he too had abandoned her.

Noticing her distress in that WH Smith shop one day a colleague, an older woman, approached and asked her what the matter was. Mary broke down and wept out her sorry story.

Deeply moved, the English woman embraced and consoled her. She brought Mary to her large house in south London. There she showed her its bright basement apartment, which she offered to Mary.

It was Mary’s home for more than three decades. She reared her son there. She worked all her life, and paid the kind English woman an agreed, nominal rent.

Mary had very little to do with the Irish community in London except for the unorthodox couple who owned a picture framing shop near where she lived. She worked there. She loved it and the clientele who came into the shop.

They were mostly theatre people. She enjoyed their instinctive tolerance, their joie de vivre, their penchant for gossip, their (by the standards of the time) outrageous personal arrangements. Beneath all that ‘luvvy’ stuff she recognised an honesty about people and relationships that was absent in mainstream society.

She attended Mass for the sake of the boy, though her own faith had been badly shaken by then. She visited Ireland rarely but kept contact with one brother. He was a businessman who helped her out and would come over to see her. But even he was pushed to the limit when she came back to Ireland.

He would ask her to hide in the back of his car, behind the front seats, so the neighbours would not see her and ask questions. When her son accompanied her to Ireland, he too had to cower in the back seat.

Much worse was Mary’s mother’s attitude. An instinctively kind and warm woman, she was deeply devout. Mary did attend Mass when in Ireland but her mother would never sit on the same pew.

Mary accepted these humiliations as her due. For she had sinned against what was also her own moral template. She felt she was not worthy. A lifetime of exile was as it should be. She did not blame her mother, her fiancé, the church, Ireland. At least not with any conviction.

There was no self-pity, just hints of self-loathing. She was never with another man for the rest of her life after the father of her child disappeared to the US, where he married and raised a family.

How could she expect any man to take her on board and when she already had a son? How could she ever tell a man such a thing? How could she face rejection again? She believed it was better to not get involved at all. So she didn’t.

Mary sent her son to Catholic schools in London and hoped he would be treated well. Her badge of shame, her little star. She hoped all those kids from regular families would not humiliate him for her sin. She hoped he would not feel humiliated when he realised the truth.

As he grew up he became religious, as well as curious and confused about his identity. Was he Irish or English? It was difficult for her to encourage him to assume an Irish identity, not that she ever spoke a bad word about Ireland. She was not a bitter person.

Her son lives now in north America. Far, far, away.

In the early 1990s, Mary returned to live with her brother in Ireland. In time she became ill and, over a period of years, declined painfully. She died in 2000 as unobtrusively as she had lived. And as well-liked by those of us who knew her. Loved, even.

When I met Mary, that student summer in London, her story was a great blow to my then green vision of Ireland. I was a little older than her son. The next summer I stayed with them. She even organised a job for me on a building site not far from where she lived.

We grew very fond of one another. One evening, as a treat, I took her to see the musical ‘A Little Night Music’ in the West End. We both agreed it wasn’t very good but we loved its main song ‘Send in the Clowns’. It became our theme tune

Afterwards, in our many moments of levity, she would sing to me: “Isn’t it rich/Aren’t we a pair/Me here at last on the ground /(she was smaller)/You in mid-air/Send in the clowns…”

To which I’d respond “...And where are the clowns/Quick send in the clowns/Don’t bother….we’re here!” Some duo.

Mary was my aunt.