Needs of survivors must be responded to generously and without delay, says President 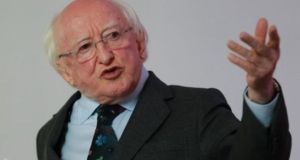 President Michael D Higgins: The State must bear primary responsibility for failing to provide appropriate supports for these tens of thousands of young women and their children. File photograph: Nick Bradshaw/The Irish Times

President Michael D Higgins has said the State and church “bear a heavy responsibility” for the “violation of fundamental rights” of women and children in the mother and baby homes. *

The report from the Commission of Investigation into Mother and Baby Homes, published on Tuesday, said it found an “appalling level of infant mortality” at the homes.

About 9,000 children died in mother and baby homes, around 15 per cent of all those who entered the institutions, the report found.

The report also contained personal testimonies from women and children who had been in the homes.

On Wednesday, Taoiseach Micheál Martin issued a State apology in the Dáil in which he told the mothers and their children that the State had failed them.

In a statement, President Higgins said the report reminds us of “how far short Ireland fell of fulfilling the promise of our Republic”.

“As President of Ireland, I welcome the publication of the Commission’s Report and the apologies offered, my thoughts must be, as they have been so often before, of the mothers and of the infants who died; of those children who survived and who continue to carry the trauma of their early lives, and beyond that the burden of being deprived of information about their birth parents; of all of those women, alive and dead, who have borne the scars of their experiences, the shame and secrecy imposed upon them, and the life-long burden for so many arising from trauma, bereavement or separation from their children,” he said.

President Higgins said the statements provided by the women affected by the homes are “powerful revelations of a society, church, a State and their institutions that contradict the traits of any real republic built on equal rights of citizens, care, true freedom, solidarity and compassion”.

He said the publication of the report is not a conclusion, but is an indication of further work required to “vindicate the rights of those women and children who resided in these homes”.

President Higgins added that now the report was complete, there is a “responsibility to move without delay” to the next phase and to “respond adequately and generously to the needs and rightful concerns of the survivors and other victims”.

“It is the State that is charged with safeguarding the welfare of its most vulnerable citizens, and it is the State that must bear primary responsibility for failing to provide appropriate supports for these tens of thousands of young women and their children,” the statement said.

“It is important, too, to recognise, and with what consequences, how a newly independent State was captured by a judgemental, authoritarian version of church/State relations that sought to be the sole and ultimate arbiter of morality.”

President Higgins said as the State must acknowledge the “institutional failings”, so too must religious organisations, social forces and professions who did not protect these women.

“Our focus now, as a State and as a community, must be to urgently meet the needs of, and address the concerns of the survivors and their families, as they have experienced and expressed them, and do whatever is necessary to support them,” he said.

President Higgins said it was important to recognise and thank those who investigated these homes, such as Catherine Corless.

“In our times we should never forget the pain that was created, and carried for life, by such judgmentalism and deprivation of care described in the evidence that has been offered, just part of the story,” he added.

“We must address the assumptions as to citizens of society on which all of what has been described has been based and resolve to craft a better place for our, and future generations.”