Tuam sisters apologise for failures at mother and baby home 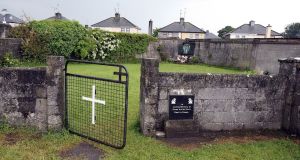 Report was ‘a little bit vague’ about the issue of illegal adoption. Photograph: Paul Faith/AFP

The religious order which ran the Tuam mother and baby home has apologised for the way it treated people there, saying it did not “live up to our Christianity”.

In a statement following the publication of the final report of the Commission of Investigation into Mother and Baby Homes, the Sisters of Bon Secours – which ran the Tuam home from 1925 to 1961 – said: “We failed to respect the inherent dignity of the women and children who came to the home.”

The sisters confirmed that they would participate in any redress scheme set up in response to the report. The order is one of the richest religious congregations in Ireland and owns private hospitals in Dublin, Cork, Galway, Limerick, Tralee along with a care village in Cork.

It is the largest provider of private healthcare in Ireland with 3,000 staff and 450 medical consultants treating in excess of 280,000 patients annually.

In 2018, the Bon Secours religious congregation offered €2.5 million towards the costs of a forensic excavation at the former Tuam mother and baby home.

Historian Catherine Corless, whose work in exposing the deaths and burials of children at Tuam had been instrumental in setting up the inquiry, welcomed the apology.

“This is exactly what I’ve been looking for,” she said. “I’m very happy with that. It really means an awful lot to us.”

Ms Corless told RTÉ Radio’s Today with Claire Byrne show that she hoped the order would follow up on the expression of remorse with an agreement to exhume bodies and to allow DNA testing of remains.

The historian and campaigner also called on other orders to “follow suit” to admit that what they did was wrong.

“This means a great deal. People wanted them to say they’re sorry, to own up to what happened,” Ms Corless said.

She was speaking amid renewed criticism from survivors about the report, with claims from some about inaccuracies and omissions.

Noelle Brown, who was born in the Bessborough mother and baby home, has said there were “10 glaring inaccuracies” in her testimony which was included in the report published on Tuesday.

Ms Brown told RTÉ Radio’s Today with Claire Byrne show that her testimony had arrived in the post on Wednesday after she had pushed for a copy of it to be sent to her.

The questions included in the report “looked like they were written by nuns in the 60s”, she added.

The tone of the questions centred around religious affiliations and social class while some were “inappropriate”, she said.

Her responses had been “shoehorned” into the report, she said, and made to look like she had answered many more questions. A major inaccuracy was that the report said that she was raised by her birth parents, which was not the case.

Participating in the report had been “a wasted effort”, she said, and she had done so in an effort to find out if she was subjected to vaccine trials. She knew of people who had the scars to show that they had been involved in such trials.

“Details are very important to adopted people. These are our stories.”

This was not a survivor-centred approach as had been claimed by Government, she said. The survivors still felt stigmatised, and the Government was out of step with society. It was not taking the temperature of the feelings of society who supported the survivors, she added.

In its statement, the Sisters of Bon Secours said the inquiry report “presents a history of our country in which many women and children were rejected, silenced and excluded; in which they were subjected to hardship; and in which their inherent human dignity was disrespected, in life and in death.

“Our Sisters of Bon Secours were part of this sorrowful history.”

Of the women and children in Tuam, it said: “We failed to offer them the compassion that they so badly needed. We were part of the system in which they suffered hardship, loneliness and terrible hurt. We acknowledge in particular that infants and children who died at the home were buried in a disrespectful and unacceptable way. For all that, we are deeply sorry.

“We offer our profound apologies to all the women and children of St Mary’s mother and baby home, to their families and to the people of this country.

It added: “Healing is not possible until what happened is acknowledged. We hope and we pray that healing will come to all those affected; those who are living and those who have died. We hope that we, our church and our country can learn from this history.”

Archbishop of Tuam Michael Neary apologised “unreservedly” for the church’s failure to show compassion to those who were “judged, stigmatised, and ostracised by their own families, by their communities, and the church”.

He said in a statement that Galway County Council owned the Tuam home and was responsible for the residents. However, the diocese had a “pastoral” role “in that the priests of Tuam parish served as chaplains”.

He said he was “horrified” in 2017 at the discovery of many human remains at the Tuam site. “These discoveries underline the enormous suffering and pain for the little ones and their mothers.”

Archbishop Neary said the disparity between the register of deaths, and the absence of burial location records, was “a matter of great public concern”.

“The burial pattern in the home in Tuam, more than any other single occurrence, has, understandably, caused the most outrage. While the report makes for difficult reading, every step towards uncovering the complete truth regarding the burial pattern is welcome.”

“I acknowledge and humbly ask forgiveness for the abject failure of the church for the pain and suffering visited on those women and their children in the mother and baby homes nationally.”

The Taoiseach will make a formal apology on behalf of the State to the former residents and survivors in the Dáil today.

Ms Corless told Newstalk Breakfast that a broader apology was needed, highlighting the role of the Catholic Church and State rather than putting so much weight on the role of society in general.

“He specifically pointed out society in general, and the parents and grandparents of these survivors. They were very, very hurt over that. They all have their own stories.”

Ms Corless said she would have preferred if the Taoiseach had said all were at fault and that there was a need for an apology “from all around”.

From her research she was aware of many of the details so they had not come as a surprise, she said. But she was disappointed that the report was “a little bit vague” about the issue of illegal adoption.

“There’s a lot of people disappointed it wasn’t gone into in a little more detail in the report.”

Campaigner and human rights lawyer Dr Maeve O’Rourke criticised the commission for treating survivors as though they were only witnesses.

Dr O’Rourke said that even though the inquiry had “a veneer of being a legal procedure” — it had not given reasons “for why it refused all those mothers their requests to have a public hearing, didn’t give us reasons why we couldn’t have a public hearing at the very beginning when we were making submissions about the need to consider rights violations under the Constitution and the European Convention on Human Rights.”

There could have been “a very flexible and inviting interpretation of the Constitution” applied, she said. “Inviting those to tell us how to understand those rights — we clearly didn’t implement them in the past, so how should we understand them now?”

Dr O’Rourke pointed out that nothing to date had given individuals access to their own files. “This has all been an exercise in talking to the public in general terms. There still are no statutory rights and in practice people’s rights are being denied — to their own information, to their own family files.

“We have a situation of enforced disappearance which is one of the most serious violations of international law — where someone is institutionalised with the involvement of the State following which their fate and whereabouts is not disclosed by the State to their family. That’s needs to be remedied by the Government.”