Parents of children with special needs: ‘It’s just going to chip away at our children’ 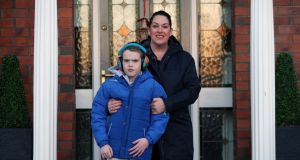 Ciara Jones and her son Gavin (11) at their home in Clonee, West Dublin. ‘A massive mistake was made. Any hope we had left is gone.’ Photograph: Laura Hutton

Gavin Jones is currently spending the days in his room, not wanting to leave or mix with the rest of the family. The 11-year-old, who is autistic, has regressed in recent weeks as a result of the lack of routine over the Christmas break.

His mother Ciara said this is only going to get worse as he won’t be able to return to school in Dublin 15 in light of current Covid-19 restrictions.

During the earlier lockdown when schools were also shut, Ms Jones said her son’s sensory processing disorder “went through the roof” and the only way to calm him was through baths.

“He always loved playing with water but he went from one bath a day to maybe eight, nine, 10 and often through the night,” she said.

“He loves shower gels, the different colours and textures, what it’s like when it hits the water. We saw his use of that rapidly increase to between 70 and 80 bottles of shower gel per week.”

Gavin also kicked out and bit objects, in a bid to cope with the unknown. Having experienced it once before, Ms Jones is “distressed” thinking about having to go through it again.

“The closure is just going to chip away and chip away at our children. Every single day that they are out of school, we see the regression and the potential they have lost.”

She is already noticing changes in his behaviour, and “can see the shutters coming down”.

“A massive mistake was made. Any hope we had left is gone. It’s just a spiralling, domino effect of tragedy.”

Earlier this week, the Government announced that special schools or classes for children with special needs would be allowed to resume from Monday while all other schoolchildren at primary level would move to remote learning. However, this decision was reversed on Thursday pending “further engagement with all education stakeholders”.

The U-turn came following mounting opposition from unions representing school staff, who expressed grave concerns over the health and safety of their members and students.

However, groups which represent those with special needs – Down Syndrome Ireland, Inclusion Ireland and AsIAm autism charity – said families are “devastated”.

Cillian has severe behavioural issues. He needs 24/7 care and I need to have eyes on the back of my head. When he is off school he is hyper

They have written to the Government seeking further engagement on the matter, adding that it is “incumbent on us all to work together to find a solution to prevent any further damage being done during this lockdown”.

Adam Harris of AsIAm confirmed on Friday that members of the organisation will meet the Minister for Education, Norma Foley, on Monday afternoon. He has called for home tuition to be made available. Up to 18,000 young people are impacted.

Sinead Grimes, whose son Cillian (10) is autistic, said it had felt like they had been “given a lifeline and then it was taken away”.

“Cillian has severe behavioural issues. He needs 24/7 care and I need to have eyes on the back of my head. When he is off school he is hyper. He doesn’t sleep. It’s about more than just education, it’s about routine and interacting. It’s really important for him.”

“The school is about 80 per cent clinical needs and 20 per cent education. Now that’s all gone. And they have such massive care needs,” she said.

“We don’t ask for much but when we say we’re in crisis, people need to take note. We’re not looking for sympathy, but we feel invisible. It’s so demoralising.”