‘I just couldn’t let it go. It just unnerved me the idea that nobody local wanted to know’ 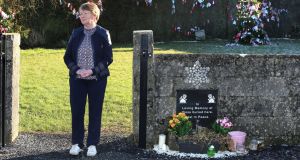 Catherine Corless, whose revelations about the deaths and burials of hundreds of children on the former mother and baby home site in Tuam, Co Galway, led to establishment of the commission, hopes that it will recommend their re-interment.

The local historian says she hopes this final report of the Mother and Baby Homes Commission, which comes years after her own tireless research began, will insist on that. “It said in the 2019 interim report the burials were illegal,” she said. “It’s obnoxious anyway and there’s no other way. They [the children’s remains] have to come out of it [the site].”

Corless traces her interest in history to the burning of Tuam on July 21st, 1920. The previous day, at Gallagh near the town, two RIC officers were killed in an IRA ambush. They were waked at the barracks in Tuam and towards dawn the following morning colleagues of the dead policemen burned the town hall as well as houses and businesses.

“My father’s brother was in that with the old IRA. He remembered his brother being beaten up by the Black and Tans.” Her father witnessed the aftermath of Tuam’s burning. “The next morning when they went to Mass he could see all the buildings smouldering. That was fascinating to me. That got me into local history and then I did a local history course.”

In the late 1990s, she saw an advertisement in a local paper for an NUI Maynooth evening course in local history. “We had a fantastic tutor, he was passionate about it, Gabriel O’ Connor, a secondary school teacher at Mountbellew [in east Galway].”

She learned how to find out information, and about resources such as the National Library, the National Archives and the Hardiman Library at NUI Galway. “He emphasised the importance of primary research – ‘get the primary stuff so you know what you are talking about’.”

She then became involved with the historical society in Tuam, which brings out a booklet every year called JOTS, Journal of Old Tuam Society. They asked her to write a chapter.

“All in all I think I did four chapters, the [one on the] home was the last one I did.

“I suppose it was always there. I lived out that way, out the Dublin road going out the country, and I remember distinctly those big high 10ft walls, and I remember the kids in school vaguely and I remember then when they knocked the home in the 1970s because I’d be cycling in and out of work at that stage.”

However, in the course of her research it was only when she visited the home site that someone mentioned a graveyard and grotto to her. “It’s a housing estate now and I just met people and by degrees they started telling me about the two boys finding the bones and all these bits and pieces.”

Researching maps on the home and its grounds, Corless says she started getting a bit suspicious, “because people said, ‘there’s a big crypt there with a lot of bones in it’, and they assumed that in olden times someone put a crypt there and I said, ‘no, the maps are telling me this is a sewage tank, that it’s not crypt’. That really sparked my curiosity at the time.

“I was really intrigued [as to] why are there children’s bones in a place where there’s a sewage tank, and that really spurred me on.”

She asked the Bons Secours Sisters, who ran the home, where deceased children were buried. “They had no idea. I asked Galway Co Council [who owned the home], no one knew about any burials or any graveyard.”

She went to the births, deaths and marriages registration office in Galway and asked if there was any possibility of finding the names of children who died in the home between 1925 and 1961. “They looked it up for me and got that staggering, staggering number of hundreds, and hundreds and hundreds [796] of death certs.”

She paid for “about 200 for the essay but I didn’t think they’d publish it because I was suggesting that 200 babies were buried in a sewage area but, fair play, they did and I was expecting a bit of a backlash after that in Tuam and questions and queries, but nothing, silence”.

Corless continued: “[That] really bothered me. I had it on my conscience and I just couldn’t let it go. It just unnerved me the idea that nobody local wanted to know.” She again contacted Catholic Church authorities, the Bons Secours Sisters and Galway Co Council “and nobody knew, nobody wanted to know”.

The reaction, she said, made her “more determined, more upset and more angry. I had to really get to the bottom of this. In my mind, it was wrong”.

She went back to the registration office in Galway and asked for a full list of children who died at the Tuam home. They gave her a spreadsheet with all the information of the deaths, which cost a couple of hundred euro.

She went back to the Bon Secours Sisters and and the council but to no avail. She checked with graveyards in Tuam, elsewhere in Galway and in Mayo. “There was absolutely nothing. There were no burial records, 796 babies died in the home. Where are they? That was the next question.

“All the authorities, I really thought they would take this on board but I realised eventually that I was alone, really and truly, that nobody was going to help and I couldn’t let go.”

In April 2014, she saw an article by Alison O’Reilly in the Mail on Sunday about an unmarked plot in Dublin’s Mount Jerome Cemetery where children who had died at the city’s Bethany home were buried. She contacted O’Reilly.

“And it took off on its own from there. To be honest, I went along with it, I didn’t have to do anything more only keep researching, keep my research together and keep talking and talking, allow film cameras into my home, sit with them day after day after day. It took on a life of its own to be honest.”

The publicity, she said, “brought out people who had been in the home. It really fascinated me because I had no idea there were so, so many of them still around and they were afraid to say anything and here they had a chance finally and they were fantastic. We used to meet here at the house maybe every fortnight or so.”

The commission to investigate Tuam and other mother and baby homes was set up in 2015. “Judge Yvonne Murphy [commission chair] came to Tuam, she wanted to see the site and I showed her around and she asked me for a copy of all the evidence I had, and I copied out everything for them I had.”