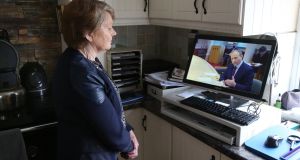 Catherine Corless watches Taoiseach Micheál Martin speaking during the live feed of the report into the mother and baby homes, at her home near Tuam on Tuesday. Photograph: Joe O’Shaughnessy

Ireland has again been brought face-to-face with its cold and callous past with the report of the Commission of Investigation into Mother and Baby Homes revealing stories of cruelty, emotional abuse and soaring infant death rates in a series of State- and religious-run institutions.

The State, churches and – most of all – the families of pregnant women and the fathers of their children were responsible for the ill-treatment of women, according to the report which took more than five years to research and compile.

A series of harrowing personal testimonies were published as part of the report, describing the enduring impact that spending time in them had on the lives of survivors.

The report says that a further 25,000 women and a larger number of children were likely to have been resident in county homes, which were not examined by the commission.

Infant mortality rates were a particular point of concern for the commission, which estimated that 15 per cent of the children who were in the homes died in them.

“Sean Ross had a much higher incidence of mortality from major infectious diseases, such as diphtheria and typhoid, than any other mother and baby home,” the report states.

It attributed this to “the transfer of mothers to the local fever hospital, where they worked as unpaid nurses, and their return to Sean Ross, where they appear to have transmitted infection to their child”.

In a damning conclusion, the report found the homes “did not save” the lives of “illegitimate” children in the years before 1960; in fact “they appear to have significantly reduced their prospects of survival.” The term “illegitimate”, referring to children born to unmarried mothers, was used in Ireland until 1987.

There was a mixed reaction from survivors. In a statement, the Coalition of Mother and Baby Home Survivors said the “truly shocking” report vindicated campaigners. The organisation said it was wrong for families to send vulnerable, unmarried, pregnant girls to be “incarcerated” in the homes. Yet it said this did not entitle those running the homes to “deprive the young girls of their legal and constitutional rights, and the right to be treated with dignity and respect”.

“We must not overlook the fact that the government and the Roman Catholic Church and Protestant churches ran the homes together hand in glove,” they said, adding that the report was “fundamentally incomplete” as it ignored the issue of “forced separation of single mothers and their babies”.

Another group, Irish First Mothers, described the report as a “whitewash” which had absolved the churches and State of “any systemic responsibility”.

Historian Catherine Corless, whose research into infant deaths at the Tuam mother and baby home was a catalyst for the commission being established, said she felt “completely deflated” by the findings.

She said she disagreed with the Taoiseach “blaming us – society” for what had transpired and called for clear apologies from the Bon Secours congregation which ran the home and the Archdiocese of Tuam.

The Government resolved to implement the recommendations of the report and Minister for Children Roderic O’Gorman said he would bring forward proposals by April 30th for a redress scheme, which would see financial compensation paid to the survivors. Mr Martin and Mr O’Gorman said they would ask the religious orders who ran some of the homes for a contribution to the cost of compensation.

Legal changes will also be introduced to provide survivors with a right to access their records, including records of their adoption. The commission’s report recommended that if a constitutional amendment is needed to ensure access, it should be introduced.

The Taoiseach will make a formal apology on behalf of the State to the former residents and survivors in the Dáil today.

The head of the Irish Catholic Church, Archbishop Eamon Martin, last night said he accepted that the church “was clearly part” of a culture in which people “were frequently stigmatised, judged and rejected”.

“For that, and for the long-lasting hurt and emotional distress that has resulted, I unreservedly apologise to the survivors and to all those who are personally impacted by the realities it uncovers,” he said.

The Sisters of the Sacred Hearts of Jesus and Mary, which owned and ran three of the largest homes, accepted “that so many women who were shunned and shamed by society did not find the support and level of care they needed and deserved at such a dreadful and painful time in their lives”. They said it was “a matter of great sorrow to us that babies died while under our care”.