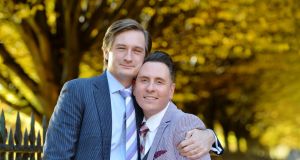 There were 1,056 same-sex marriages in 2016 accounting for almost 5 per cent of all marriages.

Carol Anne Hennessy, statistician at the CSO, said the majority of same-sex couples (850) opted for a civil marriage ceremony while 97 couples chose a humanist ceremony and 73 couples had a Spiritualist Union of Ireland ceremony.

New Year’s Eve was the third most popular date with 249 (1.2 per cent) marriage celebrations on that day.