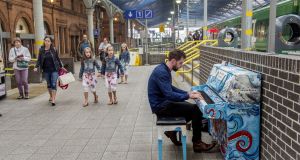 The piano on the southbound platform of Pearse Street railway station in Dublin is to be out of action for at least a week after it was extensively vandalised.

The piano has been in place on the platform since September 2017 after piano-tuner John Murphy brought the idea to Irish Rail having seen the benefits of a public piano in train stations abroad, particularly in England.

“I had always thought it would be great to try it here and when I approached management here about a month ago they loved the idea and have really embraced it,” he said at the time of its installation.

“So I bought the piano on DoneDeal, sanded it down, painted it blue and then I asked artist Sarah Edmonson to decorate it.”

However, Irish Rail spokeswoman Jane Cregan said that when Mr Murphy arrived at Pearse Street on Thursday for routine tuning of the piano, he noticed the damage.

“When he opened it up he found the main mechanism for the piano had been pulled out so there was really extensive damage,” she said.

“There will be a cost, but we don’t know how much yet. It’s awful because at this time of the year people like to play the piano and they won’t be able to do that now.”

Ms Cregan said Irish Rail was examining CCTV footage in order to try and identify who was involved or to find any evidence of tampering. She said it would then make a decision in relation to whether or not to report the matter to the Garda.

Some 30,000 passengers use Pearse Station, on 250 services every day with additional services at busy times.

Ms Cregan said at the time of the installation that it was hoped the piano would not be vandalised or stolen, pointing out the station is locked between midnight and 6am every day, with staff present at all times.