Woman claims work denied on building site as not a man 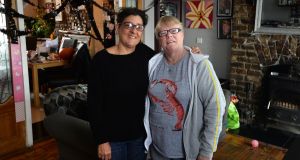 A civil engineer with more than 20 years' experience says she was told she was unsuitable for a job on a big Dublin construction project because she is not a man.

Claudia de Souza (49), from Brazil, had been offered work on the site but when asked if she was a man by text was told “no can do” and the employer was “looking for a man”.

Discrimination in employment on the basis of gender is illegal under the Employment Equality Acts 1998-2015.

Ms de Souza took a career break from her job as a building materials tester with Alphageos Tecnologia Aplicada – one the largest civil engineering companies in Brazil – in 2016 to study English in Ireland. She met Myra McGuirk, from Dublin, at the end of 2016 and they married in July of last year.

While on a student visa she had several part-time jobs, including for a few months as a lab manager with a construction materials testing company.

Since marrying she is permitted to work full time and has had jobs as a cleaner and packing fruit and vegetables. She completed a course in graphic design at Marion College as well as several courses on preparing for and seeking employment, through Intreo.

“Some have replied, not many,” she said. “Three offered me work. I was so happy, but then when they know I am a woman they told me they are only looking for a man.”

Most recently, at the end of August, she was offered work by Cork-based recruitment firm KBK Construction Services on a project in Dublin 4.

She showed The Irish Times an exchange of WhatsApp messages with project director Loughlin Finnegan. She told him her name and he asked: “You a man?” and also provided the name and location of the project.

Ms de Souza replied: “No, I am a woman but I have experience in construction civil. OK I will be there at 7.15am.”

Mr Finnegan answered: “Sorry no can do there [sic] looking for a man for a job mite [sic] have work in a few weeks.”

“I am shocked,” Ms de Souza told The Irish Times. “I had a good career in Brazil. When I came first my company at home asked me to come back after two months because they needed me, but I stay because I want to improve my English. I have always decided things for myself. I always study, work hard but now I cannot use my expertise. I have a lot.”

Sorry to ‘upset that lady’

Her wife, who has been unable to work as a carer since having surgery, receives a weekly €208.50 invalidity pension. Ms de Souza as her dependent receives €148.90 weekly on jobseeker’s allowance, a combined income of €357.40 per week. They pay €265 per month on the mortgage Ms McGuirk took out several years ago on their home in Dublin’s North Strand.

“We have a home and food,” said Ms McGuirk. “We don’t need much. But what is soul destroying is watching her so depressed, literally crying. She just needs a start.”

Mr Finnegan said he was “so sorry” if he had “upset that lady”, saying he thought he was speaking to the wife of a prospective worker.

“The non-nationals, a lot of them get their wives to do the texting and calling because their English wouldn’t be too good. When I realised it was herself was looking for work I was surprised.”

If he had known, he added, she would not have been offered the work in the first place.

Asked if he hires women he replied: “No. The work we do is heavy, pouring concrete, steel fixers. It’s all heavy work. In all my 35 years in construction I have never had a woman pick up a hammer beside me.”

A spokeswoman for KBK also apologised for the “misunderstanding” between Ms de Souza and Mr Finnegan.

“We do get a lot of calls on behalf of the partners, husbands or brothers from women in relation to jobs . . . KBK Construction Services has absolutely no issue with employing men or women as long as they meet the requirements set up by our clients . . . We are subcontractors supplying labour to main contractors or other subcontractors throughout the country.”