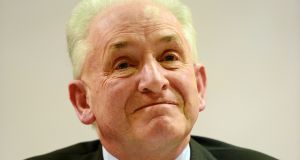 Fr Tony Flannery who celebrated Mass for his 70th birthday at the east Galway Killimordaly Community Centre in breach of a 2012 ban by the Vatican on his public ministry: “I feel free of the institution.” Photograph: Alan Betson

Comedian Groucho Marx said he would never join a club that accepted him as a member. Fr Tony Flannery goes one better. He now has no desire to rejoin a club to which he once belonged.

He would be “very reluctant to go back” unless there are both changes to Vatican investigations procedures of cases such as his and the Catholic Church radically alters its attitude to women. Neither seems likely in his lifetime.

And any possibility of Rome lifting strictures it imposed on the Redemptorist priest five years ago receded last Sunday when he celebrated Mass at the east Galway Killimordaly Community Centre. This was in breach of a 2012 ban by the Vatican on his public ministry.

The Mass was “a once off” to mark his 70th birthday this month and 40 years as a priest. Attended by over 800 people, mostly neighbours and friends, it came “close to being the loveliest day of my life”, he said.

Killimordaly is home territory. “I grew up in this community, and in the house where I am now living.” The rural area in Galway is “traditional in many ways” but the people “showed clearly to me how much has changed in our church. Diktats from the Vatican do not carry much weight any more.”

‘A quite deep disillusionment’

His Groucho Marx moment evolved. Over the five years he came to view things “from the outside” with “a quite deep disillusionment”. His faith remains intact but is now separated from the institutional church. Both used be inextricably linked in his mind. Now, “I feel free of the institution.” Yet he believes “some form of institution is necessary for the survival of the message”.

He has no doubt his role as a founder member of the Association of Catholic Priests (ACP) six years ago was “absolutely a factor” in what happened to him. The ACP began as it continues, forthright and outspoken in its criticisms of church authorities .

In 2011 Fr Flannery wrote an article criticising a dysfunctional priesthood following publication of the Cloyne Report into how the church handled allegations of abuse. He questioned whether such priesthood was envisaged by Jesus, if he envisaged priesthood at all.

It was brought to the attention of the Vatican. A self-appointed cadre of the Irish thought-police took it upon themselves, during the papacies of John Paul II and Benedict, to keep Rome abreast of those they saw as “priests behaving badly”.

As is the wont of the Vatican’s Congregation of the Doctrine of the Faith, Fr Flannery was charged, tried, and sentenced in his absence without being allowed a defence, or knowledge of his accusers

No longer a member of the ACP leadership team, there can be little doubt however that what he and they see as a denial of responsibility by the bishops in his case, and those of others, added to an already jaundiced view of church leadership.

This is illustrated acutely in the ACP’s stinging criticism of the bishops following their ad limina visit to Pope Francis last week. They accused the bishops of being dishonest in their report on the state of the Irish church to Pope Francis.

Fr Flannery goes further. He has “no doubt” the bishops misled Pope Francis and were “utterly irresponsible” in doing so. They also refused to discuss Bishop Leo O’Reilly’s request for a commission on ordination of married men and women deacons, which was “appalling and depressing”, he said.

“How can they possibly not recognise what is going on around them?It’s all falling apart so fast; it’s collapsing rapidly. Some say it’s too late, that it’s gone too far. Two generations are gone, the younger and the middle-aged are totally alienated.”

He believes the Redemptorist community at Esker in Galway, where he was based for most of his life, “will be gone in five to 10 years. It’s a bleak picture.”

It is “incomprehensible” to him that the bishops would not sit down with the ACP and discuss how this might be addressed.

Above all, what the Irish church needs is “a charismatic leader who would mobilise the laity”, as the future demands “massive lay involvement”. What it does not need is papal nuncio Archbishop Charles Browne, he said. “He is the single most destructive factor in the Irish church, particularly his policy in appointing bishops.”

When news of Fr Flannery’s Mass broke it soon became a local event. Some said it was the greatest thing to happen in Killimordaly since the hurlers won the county final in 1986.

For Fr Flannery it was a coming home. It reminded him of lines by TS Eliot: “We shall not cease from exploration, and the end of all our exploring will be to arrive where we started and know the place for the first time.”

What years are left in him will be devoted to church reform . And he will do so in the company of “a load of new friends with new perspectives”.