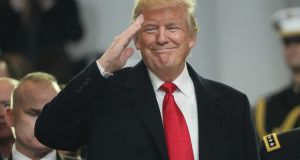 ‘He has shown you, O man, what is good; and what does the Lord require of you but to do justice, and to love kindness, and to walk humbly with your God.”

These are among the best-known words in the Bible – part of tomorrow’s reading from the Book of the prophet Micah. They are inspiring but when understood in context they become challenging because they are a rebuke to people who ignore God’s call to justice and truth. The author was a simple man from a small village called Moresheth near Jerusalem. His words were directed at the corrupt and morally bankrupt elite enjoying the high life in Jerusalem.

It’s a long way in time and distance from Moresheth to Washington but with the arrival of President Donald John Trump, one wonders, given his views, how he came to power in a nation where religion has such an important role in people’s lives.

The National Catholic Reporter, an American journal, provides interesting analysis of voting patterns in the election. It is no surprise that 81 per cent of white, born-again evangelical Christians voted for the new president but what is surprising is that 58 per cent of mainline Protestants and 52 per cent of Roman Catholics did the same, despite his reputation and stated views.

The American writer Jim Wallis drew attention to the vitriolic nature of the Trump campaign and how it abused anyone who criticised their man: “Trump’s campaign lifted a rock in American life and all sorts of ugly things crawled out from beneath that rock. They denied the image of God in the people they targeted.” But then he added: “Many left-leaning partisans responded by demonising not just Trump but everyone who supported his candidacy and often in similarly toxic language.” He mentions Hillary Clinton’s reference to his supporters as “deplorables” and how that reflected a widespread inability to listen to people who felt ignored.

The inability or unwillingness to listen has implications beyond the US. Oxfam published a report for the recent World Economic Forum in Davos where the rich and powerful gathered to talk. The report alleges that big business and the super-rich are fuelling the inequality crisis by dodging taxes, driving down wages and using their power to influence politics. It calls for a fundamental change in the way we manage our economies so that they work for all people, and not just a few.

Winnie Byanyima, of Oxfam International, said: “The millions of people who have been left behind by our broken economies need solutions, not scapegoats. Governments are not helpless in the face of technological change and market forces. If politicians . . . focus on delivering for all their citizens and not just a wealthy few, a better future is possible for everyone.”

Religion for too many people in America and elsewhere is characterised by a privatised spirituality that is primarily concerned with personal needs and prejudices. It is about escape from rather than engagement with the world. Micah would have none of this. He listed the devotions of his time and said they were not enough. “He has shown you, O man, what is good; and what does the Lord require of you but to do justice, and to love kindness, and to walk humbly with your God.”