Staff and students protesting at former CICE site in Rathmines

Claim management and Department have failed to engage with compensation issues 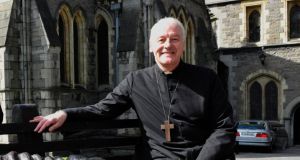 The Board of Governors of the Church of Ireland College of Education (CICE) has repeatedly sought assistance from the Department of Education in attempting to resolve issues with staff there through the Workplace Relations Commission, Archbishop of Dublin Michael Jackson has said.

Staff and students at the former CICE location in Dublin’s Rathmines are currently protesting there (Friday afternoon) at what they claim has been a failure to resolve serious issues since the College was moved to Drumcondra last year.

In a statement on Friday, Archbishop Jackson said the CICE board of governors thanked “staff and students who have been discommoded by the logistics of the move and yet still have made every effort to work towards resolution of issues which, by virtue of the enforced physical and geographical move, are outside the control of the board”.

The board expressed “its regret and sadness at unexpected inconveniences caused to individuals,” he said.

Last September, the CICE, St Patrick’s College Drumcondra and the Mater Dei Institute were amalgamated into DCU’s Institute of Education at the St Patrick’s site.

Former CICE staff claim management and the Department of Education have failed to engage in a resolution of their claims for compensation due to losses incurred by the closure of the Rathmines College and laid with the Workplace Relations Commission. They called on the CICE governors to engage urgently with trade unions to progress these claims.

Archbishop Jackson said that at every point the governors had “sought to keep staff and students informed, through consultation and updates, as incorporation into Dublin City University (DCU) took shape.”

However, transference of the property and land at the previous CICE site in Rathmines to a new trustee “has meant that as of June 30th 2016 the Board of Governors of CICE has had no scope for intervention in the day to day workings of the site.”

It was also not possible to move everything relating to CICE from the Rathmines site “with immediate effect as DCU itself was establishing, from scratch, part of its own operation on the DCU All Hallows site” while also accommodating CICE physically in the new site, he said.

Meanwhile, he believed “the care for students in transition has been exemplary as has the response to a new environment which has not been without its challenges.”