Transport Minister Shane Ross TD has said that he will not get involved in an industrial dispute between management and unions in the Bus Éireann dispute. Video: Bryan O'Brien 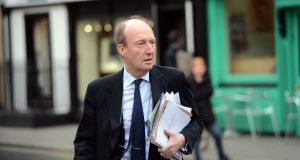 Siptu said it was not sustainable for Minister for Transport Shane Ross to maintain his position that it is up to Bus Eireann management and unions to find a resolutio. Photograph: Eric Luke

Unions representing staff at Bus Éireann have said they will take industrial action in the event of management unilaterally imposing proposed cuts.

They again urged Minister for Transport Shane Ross to establish a forum of all stakeholders, without preconditions, aimed at resolving the financial crisis in the State-owned transport company.

Unions representing the 2,600 staff met on Thursday to decide on strategy on foot of radical proposals put forward which management argues are needed if the company is to survive.

The general secretary of the National Bus and Rail Union Dermot O’Leary said unions had adopted “a measured approach”.

“If the company moves ahead and imposes cuts, it will trigger industrial action but we are very mindful that there are people in rural Ireland, in particular ,who are relying on their bus service. We would be very conscious of those vital services before making any decisions in terms of any industrial action would be.”

Siptu transport sector organiser Greg Ennis said it was not sustainable for Mr Ross to maintain his position that it is up to management and unions to find a resolution to the crisis at Bus Éireann.

“There is an industrial dispute looming which is caused by policy of the Government and the Minister needs to get involved. “

Among the proposals put forward by management are cuts to premium payments, overtime and allowances as well as redundancies and out-sourcing.

In a joint statement five unions with members at the company urged Mr Ross “to provide leadership and do the right thing by both commuters and staff by facilitating a forum, without preconditions, through which all stakeholders can play a role in resolving both the immediate crisis at Bus Éireann along with providing a platform that will ensure that a long term vision, and ultimately a public transport plan that can finally be put in place without the constant and reactionary spectre of firefighting the industrial action inferno that inevitably follows from crisis to crisis such as we are witnessing today”.