Staff and students at former Church of Ireland college protest 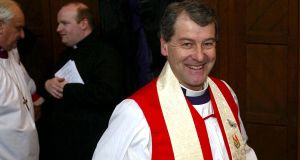 The protesters called on Archbishop Michael Jackson to urgently respond to allow a speedy resolution of the issues. Photograph: Darryl Mooney

Staff and students at the former Church of Ireland College of Education (CICE) in Dublin’s Rathmines are to stage a protest on Friday at what they claim has been a failure to resolve serious issues since the college was moved to Drumcondra last year.

The protest will take place at its former Rathmines location.

Mike Jennings, general secretary of the Irish Federation of University Teachers, said “there has been a serious failure by college governors and management to deliver on their responsibilities and commitments to staff and students of the former CICE”.

The chair of the board of governors, Archbishop Michael Jackson, had acknowledged “the validity of staff losses and concerns”, he said. “We call on him to urgently respond to allow a speedy resolution of these issues,” he said.

Last September the CICE, St Patrick’s College Drumcondra and the Mater Dei Institute were amalgamated into DCU’s Institute of Education at the St Patrick’s site.

Former CICE staff claim that management and the Department of Education failed to engage in a resolution of their claims for compensation due to losses incurred by the closure of the former Rathmines college and laid with the Workplace Relations Commission (WRC). They called on governors of the college to engage urgently with trade unions to progress these claims.

A spokeswoman for the protest group said that since its incorporation into the DCU Institute of Education “programmes offered by the former Church of Ireland College are being terminated. No clear plan has been communicated on how the financial, administrative and support services provided by the former CICE will continue for those students completing CICE programmes under the new diminished body known as the Church of Ireland Centre”.

She said that “staff professionalism, student engagement and programme delivery were all seriously compromised by this failure of college management and governors to plan adequately for closure or to manage and put in place sufficient support for the transfer to DCU for continuation of legacy programmes”.

Noting that while CICE Rathmines was “a third-level teacher education college with a proud 200-year history”, she felt it “ironic that its closure occurred with less than 24 hours’ notice for packing and final exit from the campus”.

Since then “all staff – academic and others – have seen career autonomy and progression seriously affected. Part-time staff do not yet have satisfactory contracts and face uncertainty regarding hours and payment in their new employment”, she said.

The group claims to have the support of a wide cross section of people including former CICE governors and leading Church of Ireland members who believe the college in Rathmines was closed without adequate consultation and in the absence of a coherent and communicated plan which seriously affected staff and students alike.