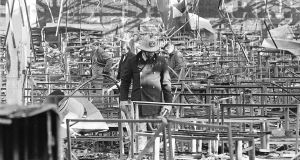 Emergency workers at the site of the Stardust fire in Artane in Dublin on February 14th, 1981. A total of 48 people died in the fire and relatives of some of those who were killed believe there is new evidence related to the case. Photograph: Tom Lawlor.

Minister for Justice Frances Fitzgerald is “confused, lying or being misled by her own officials,” families campaigning for a new inquiry into the Stardust tragedy have said.

They say she gave incorrect information earlier this month, in a written answer to Richard Boyd Barrett, TD, about changes made to a December 2008 report on the disaster.

On Thursday the Dáil accepted a Government amendment to a motion which had been introduced by Independent TD Tommy Broughan calling for a new inquiry.

The amendment, passed by 94 votes to 50, means the Government will appoint a legal expert, probably a judge, to review new evidence the families say they have gathered supporting their call for a new inquiry.

If the review agrees with the families a new inquiry will be established, says the Government. Mr Broughan described the move as “kicking the can down the road”.

Among the families’ arguments has been that the report of a review by Paul Coffey SC (now Mr Justice Coffey) was dramatically altered between its submission to government in December 2008 and publication in January 2009.

They have now released two letters which they say show Mr Coffey intended his report to be his final take. He had been appointed by the Department of Justice to review evidence gathered by the families seeking a new inquiry.

They say more than 70 changes to the report before its publication in January 2009, which they believe were made at the behest of the then government, “neutered” it.

Forty-eight young people died in the Stardust fire in the early hours of February 14th, 1981. The families had always rejected the finding of the 1981 Keane Tribunal which said the cause of the fire was probably arson.

Mr Coffey found the arson finding was unsafe. The families welcomed its formal removal from the public record in February 2009.

However, using Freedom of Information (FOI) legislation they obtained a copy of the report Mr Coffey submitted in December 2008, which said a “new inquiry is necessary if it is the only way of placing on the public record a finding that is based on evidence”.

The published report said there was a public interest “in ensuring that the public record of what happened is factually accurate and established by evidence”.

Government has maintained since, that the 2008 report was a “draft” and that Mr Coffey had asked to make changes.

However, in his cover letter accompanying his report, dated December 10th, 2008, seen by The Irish Times, Mr Coffey says: “I have completed my examination of the Stardust Victims Committee’s case for a re-opened inquiry into the Stardust fire disaster and enclose herewith a report of my findings, conclusions and recommendations”.

In a second letter, to the Department of the Taoiseach, also dated December 10th, 2008, he says: “I refer to the completed examination in which I have delivered my report to Government.”

“An earlier draft of the report had been submitted on 10 December...on the basis that the independent legal person who submitted it had asked to be permitted to make amendments for the purposes of correction, accuracy and clarification prior to its publication”.

Antoinette Keegan, who survived the fire but lost her sisters Mary and Martina, said it is “clear the report Mr Coffey submitted in December 2008 was his completed report.

“There is no record of any request from him to make changes to it. The one he submitted in December was not a draft. For the minister now to say it was draft shows she is confused, lying or being misled by her own officials”.

She said Mr Coffey’s letters showed his intention was to recommend a new inquiry, strengthening the families’ call for one. This recommendation is absent from the published report.

A spokesman for the Minister said her statement of January 17th remained her position.