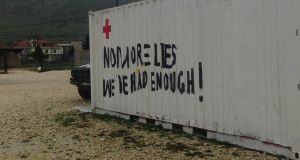 Ireland urgently needs to prepare counselling services and healthcare resources for refugee women and girls arriving in Ireland who have endured treacherous journeys and suffered sexual and physical violence, the author of a new report has said.

The Hidden Struggles report, launched by the Immigrant Council of Ireland, details the experiences of hundreds of women and girls who, after fleeing war and destruction, are now living with meagre facilities in under-resourced refugee camps.

According to its findings, one in five of the women interviewed in Greek refugee camps experienced physical violence when fleeing their home country. While the majority of this violence was committed by police or smugglers, some were exposed to violence by men they knew.

Even after arriving in the relative safety of Greece, nearly half of these women reported they “didn’t feel safe at all” in their camp. More than half reported significant infestations of pests such as rats, mice and bugs, while more than 80 per cent reported feeling depressed constantly or most of the time.

Marta Welander, founder of the Refugee Rights Data Project and author of the Hidden Struggles report, initiated the research because sexual violence among refugee women was “under-reported and under-documented”. She says the research, which was carried out in November 2016, exposes the need for dedicated and appropriately staffed safe spaces for women and psychological support for survivors of sexual and gender based violence.

“Crucially for those in Ireland welcoming increasing numbers of refugees, the research highlights an urgent need for tailored services for refugee women arriving in their new host countries,” said Ms Welander.

Razan Ibraheem, a Syrian journalist who came to Ireland as a student in 2011, says governments must combine the human stories of refugees with available data to provide an appropriate response to this ongoing crisis.

“It’s important for this to be done in a quick way so we can save a little bit of the humanity that is still inside them,” said Ms Ibraheem. “It is shameful to see these things happening on EU land.”

Minister for Children and Youth Affairs Katherine Zappone said the report’s findings were “practical calls to action” which both governmental and non-governmental State agencies can provide and must respond to.

A total of 240 people have been relocated to Ireland from Greek refugee camps while a further 519 have arrived through resettlement from camps in Lebanon and Jordan, according to the Department of Justice.