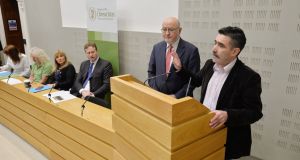 Martin Collins from Pavee Point speaking at the launch of the Justice and Equality Committee report on Traveller ethnicity at the Dáil. Photograph: Alan Betson/The Irish Times

The Government will recognise Traveller ethnicity within weeks, an Oireachtas committee indicated on Thursday.

A number of speakers at the publication of an Oireachtas report on the issue suggested a statement in the Dáil, recognising Traveller ethnicity was imminent. In addition, sources close to Minister of State for Equality David Stanton say a statement is likely “in late January or early February”.

The report from the Joint Committee on Justice and Equality, published on Thursday, says: “Travellers are, de facto, a separate ethnic group. This is not a gift to be bestowed upon them, but a fact the State ought to formally acknowledge, preferably by way of a statement by the Taoiseach to Dáil Éireann.

“The committee strongly encourages that this step be taken at the earliest date possible in 2017.”

It is the second report, making the same recommendation, from the same committee, in three years. In April 2014, the committee – with a different membership – said it was “ no longer tenable for this State to deny Traveller ethnicity” and it was “long past time for this State to honour our responsibilities to the international conventions on human rights”.

The report from the current committee “adds momentum and reinforces the argument made for a long number of years” that Travellers were a distinct ethnic minority, said Martin Collins, co-director of Pavee Point.

“I am quite confident . . . in the next couple of weeks there will be an historic announcement in relation to Traveller ethnicity,” he said.

Chair of the committee, Caoimhghín Ó Caoláin, said the report “cannot be another false dawn. We absolutely want this delivered in the shortest period possible. We are talking weeks, not months.”

“I have absolutely no doubt of the intent and commitment of Minister of State Stanton . . . We will be listening very carefully over the coming weeks and hopefully we will be able to collectively release a cheer.”

Bernard Joyce, director of the Irish Traveller Movement said the report was “timely” and he looked forward to ethnicity being recognised.

Thomas McCann of Mincéirs Whiden said he hoped the recommendation would be “acted on swiftly”. Recognition would make Travellers feel their identity was respected he said and help foster “social solidarity” between them and the settled community, he said.

Maria Joyce of the Traveller Women’s Forum welcomed the cross-party nature of the report, saying it was “important diversity, ethnicity, culture and difference is valued” and particularly that young Travellers had a positive sense of their culture and identity.