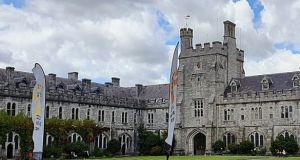 A UCC student has appealed on behalf of his family to Minister for Justice Charlie Flanagan to intervene and prevent their possible deportation from Ireland this Thursday.

Mr Khan’s parents had fled Pakistan in 1984 due to persecution and moved to Saudi Arabia but they were forced to leave Saudi Arabia in 2017 when new laws imposed punitive taxes on foreigners and they came to Ireland via the UK.

The family applied for asylum but on December 18th last they learned they had failed in their application and last Friday received notification requesting they present themselves to immigration officials in Dublin this Thursday.

But now Mr Khan, who is in living with his family at the Direct Provision Centre on the Kinsale Road in Cork, has appealed to Mr Flanagan to intervene and allow them stay in Ireland to finish their education.

“My request to Minister Flanagan is to just imagine the young teenagers who are being thrown out of the State after three years here . . . we want to remain here in Cork and finish our education so that we can become independent and functioning members of society and give something back to Ireland.

“I’m now in UCC and my brother, Zubair, is now in Leaving Cert and he and my other brothers all aspire to go to college. It is inhumane and unfair that these things are happening to my family and is causing us great stress.”

Part of the community

Mr Khan is a former pupil of Coláiste Eamonn Rís, formerly Deerpark CBS on Cork’s south side, and his three younger brothers are attending the school which is backing them in their campaign to stay in Ireland. Principal Aaron Wolfe said that staff and pupils at the school were fully supportive of the Khan family who had become an integral part of the school community since their arrival in Cork.

“Nobody saw Friday’s announcement coming that they would have to present themselves on Thursday so it’s moved very fast and we believe it is very unfair,” said Mr Wolfe.

Director of Inclusion at UCC Karl Kitching also backed the family’s efforts to remain in Ireland when he spoke to the Neil Prendeville Show on Cork’s Red FM.

“We learned about the proposed removal of the Khan family on Friday and . . . it is our role as a university of sanctuary to speak out to plead with the Minister for Justice to intervene. He does have the power to intervene and to make the right decision for this family,” he said on the show.

Contacted about the Khans, the Department of Justice said it could not comment on individual immigration or asylum cases for reasons of confidentiality. But it said there was a difference between deportation and transfer.

The department said that the decision to transfer somebody is made under the EU Dublin Regulation which determines which EU member state is responsible for examining an international protection or asylum application.

The department explained that the regulation is based on the principle that the first member state to facilitate entry to the EU should be responsible for examining the protection or asylum application.

“It should be noted the making of a transfer decision under the EU Dublin Regulation is not a deportation order. The Dublin Regulation determines which EU member state is responsible for examining an international protection application.”