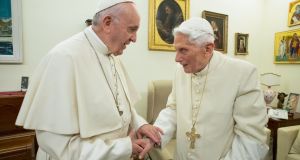 Pope Francis with former pope Benedict at the Vatican in December 2018. Photograph: Vatican Media/AFP via Getty

The former pope Benedict XVI has spoken out against allowing married men to become priests, in a move that could jeopardise a potential plan by Pope Francis to change the centuries-old requirement in areas of the Amazon.

Benedict, who implied upon his resignation in 2013 that he would not interfere with the work of his successor, has defended clerical celibacy in an explosive book written with the outspoken conservative cardinal, Robert Sarah.

In extracts of the book published by France’s Le Figaro newspaper on Sunday, the authors urged the Catholic church not to be “swayed” by “bad pleas, theatrics, diabolical lies and fashionable errors that want to devalue priestly celibacy”.

In October Pope Francis agreed to consider a request by bishops in the Amazon to allow married men to become ordained in order to overcome a shortage of clerics in remote areas of the region.

“I cannot keep silent!” Benedict (92), wrote in the book, From the Depths of our Hearts: Priesthood, Celibacy and the Crisis of the Catholic Church.

The authors said it was “urgent” that bishops, priests and laity “let themselves be guided once more by faith as they look upon the church and on priestly celibacy that protects her mystery”.

While Benedict, who promised to “remain hidden” after his resignation, has come forward on various issues over the past seven years, this is the first time he has intervened on a matter that the more liberal Pope Francis is actively considering.

“It’s a first for Benedict but also for the church,” said Joshua McElwee, Vatican correspondent for the National Catholic Reporter. “I can’t think of any example of a former pope speaking in public about something still under consideration. There’s a real worry that the figure of the former pope, who has a big following among those from more conservative circles, could prevent Francis from making a decision that he felt was right for the church.”

At the end of the Vatican synod on the Amazon in October, Pope Francis said he would publish his decision on the ordination of married men later this year. If he supports the move, it would be limited to the Amazon region and would apply only to men already serving as deacons.

A document approved by bishops in the Amazon noted that people of Catholic faith in the region have “enormous difficulties” in receiving communion and seeing a priest. It proposed to “ordain priests suitable and esteemed men of the community”, who had already had “fruitful” experiences as deacons.

The proposal is seen by many as setting a precedent that could bring an end to the restriction on married Catholic priests throughout the world.

The implications of Benedict’s intervention are grave, given that conservative and traditionalist Catholics nostalgic for Benedict’s orthodoxy are already deeply opposed to Francis, with some even considering Benedict’s resignation illegitimate.

“Francis has been very clear on several occasions that he considers celibacy very important, he doesn’t want to get rid of it completely and he’s only considering this request because it’s coming from bishops on the ground citing the needs of Catholics,” said McElwee.

McElwee also pointed to a move made by Benedict during his papacy to create norms that allowed for Anglican priests who switched to Catholicism to join the church while remaining married.

Massimo Faggioli, a historian and theologian who writes for the Catholic newspaper, La Croix, criticised Benedict’s move on Twitter: “This is not about clerical celibacy,” he wrote. “It’s about the freedom of one pope Francis AND of the synodal process.”

The intervention comes as Netflix airs the Two Popes, a drama about the relationship between Benedict and Francis. Benedict was the first pontiff to resign in 600 years and still lives within the walls of the Vatican. The pair are said to have a cordial relationship although Francis’s efforts at reform have made him unpopular among conservative Catholics.

In a controversial essay published last year, Benedict blamed the Catholic church’s paedophile priest scandals on the sexual revolution of the 1960s and “homosexual cliques” among priests. His comments were in sharp conflict with Francis’s efforts to steer the church out of a crisis that has blighted it for decades. – Reuters