‘Where is freedom of speech?’ Alphonsus Cullinan asks after impeachment vote

Students at University College Dublin voted to impeach their students’ union president Katie Ascough after she blocked the publication of information on abortion in a college magazine. 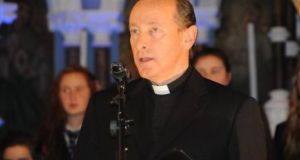 A Catholic Bishop has asked “where is freedom of speech” following the impeachment of former UCD Students’ Union president Katie Ascough.

Bishop Alphonsus Cullinan of Waterford and Lismore expressed support for Ms Ascough who was impeached last week by the union over removing information on abortion from a student handbook.

Dr Cullinan said that Ms Ascough was to be commended for her anti-abortion views and her refusal to have the UCD Students’ Union print clearly pro-abortion material in its handbook for students.

Ms Ascough was removed from office last Thursday night after a clear majority voted to impeach her but she had been open and honest in her campaign and had respected the law and should be commended for that, said Bishop Cullinane.

“So if you are pro-life and a Students Union president - you have a hard time in Ireland and where is freedom of speech in this?” asked Bishop Cullinan at a conference in Waterford at the weekend entitled The Crisis of Democracy in Ireland.

Bishop Cullinan addressed abortion directly in his comments to delegates at the conference . Ireland will hold a referendum next year on the Eighth Amendment to the Constitution, which places an equal right to life on the unborn child and the mother.

Fertilisation is the key moment in terms of establishing the beginnings of a person’s existence and therefore a distinct human individual is already present once fertilisation takes place and should be recognised as such, he said.

Bishop Cullinan said people should be guided in their deliberations by the reality of what happens in the life of each human being, between conception and birth and firmly asserted the rights of the unborn as a person, defining that life as beginning at the moment of fertilisation.

“The distinct identity of a human individual is already present once fertilisation has taken place. Everything else is simply the process of growth and development of a person who has already embarked on the journey of life.”

He said that some have argued in the current debate on repealing the Eighth Amendment that abortion is a human right but he believed that this view was inconsistent with an integral understanding of human rights.

“We would point out that the European Convention on Human Rights requires that “everyone’s right to life shall be protected by the law”, said Bishop Cullinan, adding the UN Convention of the Child defines a child as anyone under 18 but makes no “distinction between born and unborn children”.

Bishop Cullinan also challenged the language being used in the debate, suggesting that terms such as “foetus”, “embryo” and “zygote”, which had specific technical meanings. were being used by those campaigning to repeal the Eighth Amendment with a definite intent and purpose.

“We question why, in public discourse, healthy unborn children are always referred to as “the baby” while those who, in the opinion of some, do not measure up to expectations are routinely defined as the “foetus” or the “embryo”.

“We are concerned that language is being used with the intention of depersonalising certain categories of unborn children in a way which seeks to normalise abortion,” said Bishop Cullinan, adding that many thousands of Irish people are alive today thanks to the Eighth Amendment.

Bishop Cullinan rejected suggestions that the current legal regime does not provide a safe medical environment for Irish mothers.

“The goal of good maternal care would be to achieve a maternal mortality rate of zero. Sadly this is practically impossible because there are some potentially fatal medical conditions related to pregnancy which cannot easily be predicted for individual women,” he said.

He pointed to 2015 figures from the World Health Organisation which showed the maternal mortality rate for Ireland is 8 per 100,000 live births which places “Ireland in the lowest, or best, category and consistently ahead of the United States and the UK where abortion is readily available.