Iarnród Éireann trains will not operate across inter-city, Dart and commuter routes 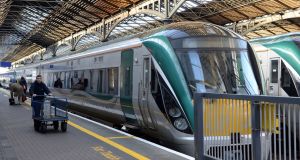 Irish Rail will not be providing alternative transport on the dates of the action and other transport operators will not be accepting its tickets. Photograph: Eric Luke

The first of five one-day rail strikes looks set to go ahead on Wednesday, impacting on an estimated 155,000 Iarnród Éireann journeys.

The company said trains are not expected to operate across inter-city, Dart and commuter routes.

November 14th is the date of Ireland’s World Cup play off game against Denmark in Dublin while December 8th is traditionally a big pre-Christmas shopping day. Iarnród Éireann said passengers will be entitled to refunds for monthly, annual and other tickets.

The announcement of strikes was made after a collapse of talks at the Workplace Relations Commission over pay. Unions had sought annual pay increases of about 3.75 per cent - similar to the rises secured by workers at Dublin Bus and Luas after strikes last year.

In a statement on Tuesday, Iarnród Éireann management said it regrets the decision by the company’s trade unions. It said the effect will be disruption to customers, loss of pay for its employees, a weakening of the company’s finances which has accummulated loses of €160m, and a reduction of its ability to adddress the pay claim.

It said it remains committed to resolving the claim through dialogue and through industrial relations mechanism. It has offered a 1.75 per cent increase for one year.

He was responding to a claim by Irish Rail spokesperson Barry Kenny that a €43million pay claim will bankrupt the transport company.

“We have to be responsible for our customers and staff,” Mr Kenny told RTÉ’s Today with Sean O’Rourke show.

Mr O’Leary pointed out that Irish Rail recently reported record revenue and passenger numbers, but that the legacy debt “because of underfunding by successive governments” meant that the company needed compensation of €125million according to a report.

The NBRU general secretary claimed that recent pay talks had been “torpedoed” by Irish Rail and that no one in Irish Rail was talking to the unions.

However, Mr Kenny disputed this and said that there had been informal talks between Irish Rail HR and trade union representatives.

“You’re calling me a liar,” said Mr O’Leary. “I can categorically say there have been no talks in relation to this dispute.”