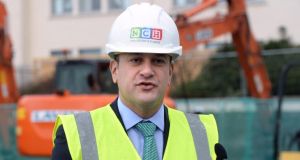 Taoiseach Leo Varadkar. “If High-Vis Varadkar had a favourite meal, it would be fresh sod and (video) clips.” Photograph: Dara Mac Dónaill

The name change passed us by, but since Leo took over as party leader it seems that FG now stands for Fluorescent Government, with High-Vis Varadkar enthusiastically driving this new rebrand.

The Taoiseach has developed a serious attachment to visibility clothing and workwear, with fears growing in Government Buildings that he may have to be carted into St Vincent’s to have the hard hat surgically removed.

During the last administration, there was a fondness for making big announcements about projects that were “shovel-ready”. Former Labour leader and tánaiste Eamon Gilmore was one of the main culprits in this regard. The phrase was used in relation to building work about to begin.

In an interesting twist, High-Vis Varadkar has designated himself as a shovel-ready project.

So far, it’s been going quite well for him on the photograph and television footage front. We saw him climbing ladders in the recent storms while he wielded a pristine shovel at three sod-turning photo-ops during the week.

If High-Vis Varadkar had a favourite meal, it would be fresh sod and (video) clips.

But sadly, Leo may have lost out on an excellent opportunity to pull on another clean high-vis vest when he heads to Cavan in a couple of weeks for his first ardfheis as leader of Fluorescent Government.

Major roadworks on the road leading to the conference hotel are due to finish in around a week’s time. But with any luck there might still be enough gravel and traffic cones lying around for some shovel shots.

The roadworks gave Paddy O’Rourke, a Fianna Fáil member of Leitrim County Council, a marvellous opportunity to stir things up with the Opposition.

Speaking to Joe Finnegan on Northern Sound radio this week, Paddy said he believed it was a merely “a coincidence” that “the only stretch of rural road the Taoiseach will be witnessing on his trip from Dublin to the Slieve Russell” hotel is going to be in excellent condition.

Cllr O’Rourke felt it was unfortunate that Leo wouldn’t be able to experience the true state of most of the rural roads in west Cavan.

“He’s going to leave with the false perception that this is simply wonderful – you have a speed track all the way from the roundabout at Belturbet over to the Russell with a surface on it like the runway at Heathrow Airport.”

The Fianna Fáil man, is, of course, absolutely correct when he says it is “coincidental”. Transport Infrastructure Ireland gave the go-ahead for the project over a year and a half ago.

Kick-off time for High-Vis Varadkar remains the same: he will start at 8.30pm and talk for half an hour before the main evening news. His main rival will be Coronation Street.

This means Joe Duffy’s popular Liveline Callback programme has been bumped and will be shown at another time. Viewers tuning in to hear a good yarn from Joe will be a bit puzzled when they get FG – Fluorescence in Government – instead.

Earlier this month, RTÉ dropped an edition of his Liveline radio show in favour of Paschal Donohoe and his budget. If it happens again, Joe might start thinking the Government has it in for him.

“I’m worried sick now” confided Joe, speaking from Tralee after his Funny Friday programme. “I’m genuinely afraid my Christmas Eve show in Grafton Street with Brendan O’Carroll will be taken over by Paschal and Leo. I’m telling them now: the pair of us won’t go down without a fight.”

Noone calms amendment committee with fairness

It has been a good few weeks for Fine Gael senator Catherine Noone, who – in the opinion of many observers and most members of the Oireachtas Joint Committee on the Eighth Amendment – is displaying admirable composure in the face of allegedly disruptive behaviour by certain anti-abortion campaigners on the committee.

Her calm and fair stewardship of the hearings has won much praise around Leinster House.

The weekly sessions have been conducted, in the main, in a calm and reasoned fashion with evidence from highly-qualified, experienced professionals and academics providing much food for thought. Most importantly, they are giving facts.

All members of the committee were asked to recommend witnesses, the only stipulation being that they possess a relevant expertise or competency in the chosen area. This also allows the committee to cover costs, particularly if people have to travel a long distance. Some members put forward names but then didn’t provide supporting information when asked to do so.

The level-headed conduct of this committee has given an insight into why the recent Citizens’ Assembly reached its decision to recommend abortion within a 12-week term limit. That outcome came as a surprise to many, regardless of their position on the issue.

However, the assembly took the time to hear a lot of evidence, medical and otherwise, from Irish-based professionals along with a number of witnesses who gave information on how abortion is provided for in other jurisdictions. It was a fact-based exercise, but there was also powerful testimony from interest groups on both sides of the abortion debate.

Judge Mary Laffoy presided over the proceedings with meticulous – often to the point of tedium – attention to fairness.

At no time was there any grandstanding to detract or distract from the substance and fact under consideration. No entertaining diversionary tactics were employed to sidetrack the media from the serious matter at hand.

It was in this calm, engaged and politically neutral atmosphere that the assembly reached its decision.

Given what has happened so far at the committee, what is the chance of that scenario happening when the debate finally reaches the Dáil and Seanad?

TDs and senators betray no anxiety over ‘Judas kiss’ letters

On Wednesday, after the committee on abortion finished, a Fine Gael colleague stopped Catherine Noone in the corridor and sympathised with her for having to put up with accusations of bias from angry members.

“Ah, well,” the chairwoman shrugged, “sure, I’ll get my reward in heaven.”

Senator Noone was referring to the package sent this week to most, but not all members of the committee. They were calling it the “excommunication letter” as it contained a folder which opened out to display a document about excommunication on one side and a framed picture of Judas kissing Jesus on the other.

Labour’s Jan O’Sullivan, who is among those members in favour of repealing the Eighth Amendment, said she felt slightly left out when she didn’t get one. “Then, in fairness, I realised I can’t be excommunicated from something I was never a member of, ” said Jan, who is Church of Ireland.

That was until Friday morning, when she got her “Judas kiss” letter in the post anyway. The way things are going with these excommunication letters, things could turn very awkward next August when the Pope visits.

The Fianna Fáil senator from Mullingar Aidan Davitt is looking forward to the big event already.

“I rise in anticipation that His Holiness Pope Francis will visit in the third week of August, with the possibility that Croke Park will facilitate a celebratory mass on August 26th. I suggest we invite Pope Francis to address a joint sitting of the Houses,” he said in the Seanad.

Should this happen, will the excommunicated ones be allowed in? Probably. Pope Francis seems like a very laid-back Pontiff. He’ll be well able to cope.

The finest footballing politicians in Leinster House brought their unique brand of soccer magic to Tolka Park last Sunday and were soundly thrashed.

Unique, in that nobody had ever seen the like before. The Oireachtas XI, under the captaincy of Labour senator Aodhán Ó Ríordáin, buckled in the second half under sustained pressure from the Dublin Devils, a soccer club for gay men which is now in its 13th season. The match was a fundraiser for the marriage equality campaigns in Northern Ireland and in Australia.

The final score was 7 -2 for the Devils. It was a particularly bad day for doughty custodian of the nets and People Before Profit TD Richard Boyd Barrett, who may never drink a glass of 7-Up again.

Alliance Party MLA for South Belfast Paula Bradshaw was the other female member of the team.

And still on sport, good luck to all the Dublin marathon runners this weekend and apologies to the people of Cork.

You see, we got it into our head that the Leesiders were planning to undermine the race by holding a rival event in the Real Capital. It’s the Government’s fault, and more specifically, it’s the fault of the Taoiseach, Paschal Donohoe and the Department of Finance.

This isn’t the first time such confusion has arisen. When the country was going down the tubes under Fianna Fáil there was a lot of talk about holding races in Cork. It resurfaced this week when there was talk, from the Independent Alliance in particular, of doing serious things to banks who rob their customers, such as imposing big fines and sending in the gardaí and holding the people at the top to account.

Our old scary friend “A Run on De Banks” is back.

‘Dine in the Dark’ to give TDs taste of sight impairment

New security measures come into force in Leinster House on Monday when visitors will be required to pass through airport-style screening on entering the building.

The authorities stress the measures “are part of an overall enhancement of security arrangements which have already been approved and they do not reflect any expected change in the prevailing security situation”.

The process involves X-ray examination of bags and a walk through a metal detector archway. Visitors can come into Leinster House now only via the Kildare Street entrance.

On a happier note, Clare senator Martin Conway is hosting Leinster House’s first “Dine in the Dark” event in the Oireachtas Members’ private dining room on November 7th. Martin, who is visually impaired, is running the event in association with the National Council for the Blind and the Restaurants Association.

“This is a unique and wonderful experience where diners are blindfolded and eat from a tasting style menu, heightening people’s sense of taste, touch, smell and communication. Diners will get an insight of what it’s like to live life as a blind or vision-impaired person” he says.

Five tasting courses, including wine, will cost €25. Martin will be inundated.

Leo might even attend, although if he wears his high-vis vest, nobody will notice.