Weekly cost of full-day childcare rose by €7 in 2016/17, the first such increase in five years 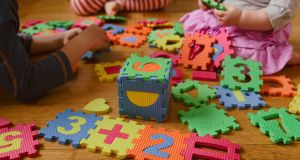 A national survey of childcare facilities has found that full-day fees have increased by an average of €7. Photograph: iStock

Early years childcare has become more expensive across the country and there are fewer places available, a new study has shown.

A national survey of childcare facilities has found that full-day fees have increased by an average of €7, bringing it to €174 per week, the first such rise to be witnessed in five years.

Pre-school places in Dun Laoghaire-Rathdown were most expensive, costing €228 per week for full-day care, while Wicklow and Fingal also came in above €200. Leitrim and Monaghan were the least expensive areas at €142 each.

The price differentials between areas were largely consistent across full-time, part-time and sessional care.

Donegal, Carlow and Clare had the highest percentage of vacant places at a county level, while all four Dublin local authority areas had the lowest proportion of vacancies alongside Sligo, Waterford and Longford.

Overall the number of children availing of the Government’s Early Childhood Care and Education assistance programme was up 63 per cent to 120,000 in 2016/17, due largely to the introduction of the second free pre-school year.

Childcare centres have previously issued warnings over their capacity to cope with increased demand arising from the second free year.

In terms of working conditions, half of all staff in the early years sector are part-time, and there was also a high incidence of employees on 38-week contracts.

Unions representing workers in the sector have maligned such seasonal working patterns, saying they offer little wage security to the cohort in question.

Early years staff were paid an average of just under €12 an hour, with wages highest in Dublin and Cork, and lowest in Carlow and Laois, the latter being the only county in which average pay dipped below €11.

The workforce across the sector has become increasingly qualified, and 98 per cent were found to be female.

Commenting on the figures compiled by community support agency Pobal, Minister for Children and Youth Affairs Katherine Zappone called for increased investment in childcare over the coming years.

“This report adds to the growing body of evidence needed to target increased investment in early years. It provides insights on other important policy priorities, like affordability, sustainability and quality, and will be critical in guiding this rapidly expanding sector in future years,” she said.