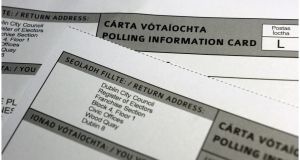 Ireland is one of the few countries without a permanent electoral commission to standardise voting registration rules. Photograph: Bryan O’Brien

The late voter registration system is archaic and confusing and needs to be reformed before the next election, youth groups have said.

The closing date for registering to vote in the upcoming referendum on the Eighth Amendment was Tuesday, with many thousands of people getting their registrations in to their local councils at the last minute.

To get on the supplementary register voters must get the correct form from their local council or download it online before getting it stamped by a garda.

The official requirements dictate that the form must then be posted or handed in in-person to the local authority. However, yesterday 23 local authorities said they would also accept stamped forms that had been scanned and emailed to them.

A small number of local authorities also had a garda on the premises to stamp forms as they were being handed in but this was not available in the vast majority of locations.

“We have 31 city and county councils responsible so in effect you’re going to get 31 different approaches. The legislation is very clear on the deadline but the different local authorities do their own thing otherwise,” said Youth Council of Ireland deputy director James Doorley.

He praised local authority staff for dealing with such a volume of registrations but said they were using with a “cumbersome 19th century system”.

Mr Doorley said the variation is procedures in different councils is a needless obstacle to registration. He suggested a system similar to New Zealand’s where voters can register at any point throughout the year.

“The system is creaking – yesterday just exemplifies why we need reform.”

Michael Kerrigan, president of the Union of Students in Ireland (USI), said the system was “very backward and it’s very, very old fashioned. It’s waste of time, money and paper.”

He said the USI was advocating for the complete reform of the electoral registration system including automatic registration of voters when they turn 18.

“There’s no point in trying to fix a broken system. Student unions have been trying to run voter-registration drives every year. It’s not what we should be doing but we were left with no alternative because we have such a difficult system.”

Lord Mayor of Dublin Micheál Mac Donncha said he got complaints from two people on Tuesday who were trying to help young people register at their local council office at Coolock, only to be told they had to go the council headquarters in the city centre.

Later in the day staff at the Coolock office reversed their decision and decided to accept the forms.

“Clearly many people were under the strong impression that local offices would accept the forms, only to be gravely disappointed. All this points to a need for a total overhaul and modernisation of the voter registration system, which should now be undertaken immediately in time for the next general, local and EU parliament elections,” Mr Mac Donncha said.

“It’s unsatisfactory that people are making the effort then falling at the last hurdle.”

Ireland is one of the few countries without a permanent electoral commission to standardise voting registration rules.

A permanent commission has been promised by successive governments since 2007, including the last one, and its establishment was recommended by the Citizen’s Assembly earlier this year.