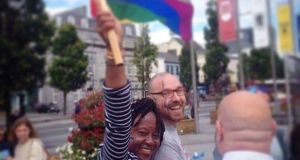 Friends of the transgender woman who died in a direct provision centre in Galway on Galway are gathering this afternoon to celebrate her life.

The woman, known as Sylva, lived at the all-male Great Western House direct provision centre in Prospect Hill in the city centre.

Believed to be in her 40s and originally from Africa, she died on Thursday after becoming ill.

The Teach Solais LGBT Resource Centre at Merchants Road is holding a closed event this afternoon from 2pm for those that knew Sylva.

The Department of Justice has confirmed a death has occurred in a direct provision centre in Galway.

A spokesman said it was understood the deceased had fallen ill at the centre and a post mortem would take place.

“In line with normal practice where a death occurs of a person who is availing of accommodation services, the Department was notified of the sad passing of this person,” he said.

“Our understanding is that the person fell ill at the Centre. As is normal practice in cases of unexplained deaths, a post mortem examination will take place. We wish to express our condolences to the loved ones of the deceased. We will not be commenting further at this time.”

Local LGBT groups named the deceased as Sylva, a transgender woman in her early 40s who did not use a surname.

Friends said she lived in South Africa for some time before coming to Ireland.

She had been living in an all-male direct provision centre since early last year, coming out as a transgender woman around two months after arriving in Ireland.

On Thursday her body was discovered in her room at the reception centre in Galway’s Eyre Square, which accommodates 160 asylum seekers.

Sylva’s death in a male direct provision environment has angered anti-racism activists, but friends called for time to mourn her without the event being politicised.

The Galway Anti-Racism Network said it had removed previous Facebook post and Tweets on the death after being asked not to politicise Sylva’s death.

“We reacted to the outrage from our members living in direct provision as well as public posts since yesterday evening from other advocacy groups,” the grou said on its Facebook page.”We are removing them as a mark of respect. This is a time for mourning and remembrance. Sylvie was only taken from us yesterday evening. We will not be taking any media requests.”

In a statement, the board of LGBT group Amach Galway said it was “devastated” by the news of her death and would work towards “honouring her life.”

One resident living in the centre, who asked to not be named, described her as a “friendly person”.

The atmosphere in the centre on Friday was “very sad,” he said. “It is a person you are living with all together, it is kind of like a family.”

Sylva enjoyed cooking, he added. “If she was cooking she would always offer people some food.”

Masi, a group which represents asylum seekers, said the community was “saddened with this untimely loss”.

It is believed Sylva had asked to be transferred out of the all-male reception centre, according to sources who knew her. It is understood she had a single room at the centre.