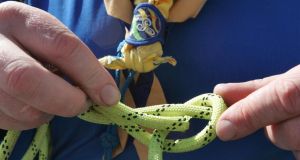 Scouting Ireland has twice had its funding suspended by the Minister for Children Katherine Zappone over governance issues. File photograph: Brenda Fitzsimons

The youth organisation twice had its funding suspended by Ms Zappone over governance issues last year, arising from a controversy over the flawed handling of a rape allegation first revealed in reports by The Irish Times.

Ms Zappone provisionally restored funding to Scouting Ireland in November 2018 on the condition of several reforms in safeguarding and governance.

Earlier this spring and again on Friday, Ms Zappone renewed funding on the basis of progress.

Commenting on the decision, Ms Zappone said she acknowledged “the further significant progress achieved by Scouting Ireland in the implementation of numerous important recommendations, particularly with regard to safeguarding issues”.

“But as I await a final update that will bring the organisation’s governance standard up to the required level I have decided to extend funding to Scouting Ireland for a further four-month period up until the end of April 2020,” she said.

Scouting Ireland receive €1.1 million a year from the Department of Children, a major proportion of the organisation’s overall income.

Back in February the organisation’s current child protection standards were called into question by Tusla, the Child and Family Agency, over its handling of several recent youth-on-youth abuse cases.

Tusla challenged the organisation’s supervision standards for overnight trips and its adherence to child protection legislation. Scouting Ireland robustly defended its current practice at the time, but committed to work with Tusla to address the agency’s concerns.

The organisation is also dealing with the fallout of a major historic child sex abuse scandal, with revelations that over 300 people were allegedly molested as children by scout leaders in former legacy organisations.

The abuse mainly took place between the 1960s and 1990s, with some evidence the abuse was covered up at the time, and that known abusers were permitted to move between troops. An internal review has identified 321 alleged victims and 247 alleged perpetrators.

The abuse occurred in the Catholic Boy Scouts of Ireland and the Scout Association of Ireland, two legacy organisations which merged to form Scouting Ireland in 2004.

Child protection expert Ian Elliott, who has been advising the organisation on safeguarding reforms, is to complete a full report on the historic abuse by February 2020.

It is understood the organisation will also be called to appear before the Oireachtas committee on children and youth affairs next month, to provide an update on current child protection standards, and the historic abuse scandal.

Ms Zappone said she plans to meet officials from Scouting Ireland in March 2020 and at that point will consider if the organisation “has achieved the strong governance standards required” for her department to commit to the ongoing restoration of funding.