Reality of deportation: ‘I plead with my life... to be allowed to remain’ 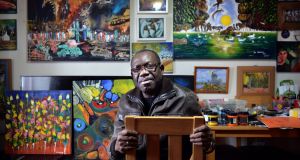 Artist and writer Joe Odiboh, who is originally from Nigeria, at his home in Dundalk, Co Louth. He has lived in direct provision for eight years, but is now facing deportation. Photograph: Dara Mac Dónaill

The walls of Joe Odiboh’s small apartment in Dundalk are plastered with dozens of multicoloured canvases he has painted during his time in Ireland. A former art teacher, Odiboh’s oils and watercolours have served as a much-needed distraction during his eight years in the asylum system. However, nothing can block out the fact that he is now facing deportation from this country.

On September 19th, Odiboh received a letter from the Department of Justice stating he no longer had permission to remain in Ireland, and should return voluntarily to his country of origin or face deportation.

Odiboh came to Ireland in 2011 from South Africa, where he says he suffered xenophobic attacks as a foreign national being originally from Nigeria. He says he also worked as a police informant, but faced violence after his cover was blown.

He spent a number of years in Sligo’s Globe House direct provision centre before moving to the Carroll Village housing for asylum seekers in Dundalk. In 2015, he provided testimony and took part in the 2015 McMahon review of the direct provision system.

Even though his applications for refugee status and subsidiary protection were refused, he had hoped the Government would allow him to stay in Ireland through leave-to-remain. Now he has been told to leave the country.

The letter telling him to leave was issued after Odiboh withdrew the appeal of his subsidiary protection case, believing he should reapply in order to secure leave-to-remain. He says he was acting on advice that people who had spent five years or more in the system should apply separately for leave-to-remain.

Odiboh is one of the 1,759 people who have received deportation orders so far this year. He joins 79 other Nigerians facing deportation, along with 553 Pakistanis, 224 Brazilians, 95 Bangladeshis and 93 Indians. However, just 241 of these orders have been carried out to date.

In reality the majority of people who receive deportation orders to leave Ireland are not actually escorted on to a plane. The Department of Justice says “significant numbers of people” leave voluntarily after the deportation letter arrives. However, as exit checks are not carried out it is unclear exactly how many people leave of their own volition.

Enforced removals, says the department, are only carried out as a “last resort” with the support of the Garda national immigration bureau.

The high cost of deportations often acts as a deterrent to carrying out orders, while sometimes people simply cannot be sent home because of instability in their country and a lack of civilian flights entering the jurisdiction, according to a legal professional working in immigration.

The lack of diplomatic ties with a country can make it difficult for the State to come to an agreement around deportations, and finding gardaí willing to accompany a deportee back to their home country can also be problematic.

A couple of times a year the Government charters a flight to take deported people to one particular country, said the legal source. A number of such flights have returned people to Nigeria.

Earlier this year the Department of Justice announced in its annual immigration review that 5,028 people had been “deported or otherwise removed” from the State in 2018. In reality, just 163 people living in Ireland were taken from their homes and put on a plane.

Some 68 EU nationals were returned home following removal orders, and 22 asylum applicants were returned to the EU country where they made their initial application for international protection.

Another 213 people voluntarily returned home with Government support. The remaining 4,562 were refused permission to enter the country (leave to land) at Irish ports, and spent a few hours in the country before departing on the next available flight.

Pakistanis are the nationality most likely to receive deportation orders (although more Nigerians than Pakistanis have actually been sent home in recent years). A total of 1,555 deportation orders have been issued to people from Pakistan since 2016, with 117 people forcibly removed from the State.

A number of sham-marriages between Pakistani men and European women was a “driving force” in this rise in deportation orders, according to a former government cabinet minister who requested anonymity.

“We had a few of the centres suddenly fill up with men from Pakistan. It happened all of a sudden.

“If people aren’t suitable and don’t meet the criteria they have to be deported,” said the source, who admitted that many failed asylum applicants become confused by the long silence after receiving a deportation order. This can encourage people to drop out of the system and disappear. You either have a serious deportation system or you don’t. I think we’ve been ambivalent about it because people have been here so long.”

Gardaí behind Operation Vantage, set up in 2015 to tackle international crime gangs organising sham marriages, believe nearly 2,000 such marriages have taken place in recent years with men from Pakistan, India, Bangladesh and other Asian countries marrying women from Portugal, Latvia, Estonia, Slovakia and other European countries for a fee of up to €20,000.

Despite increased rhetoric around false asylum claims from Albanians and Georgians, just 42 Georgians have been deported from Ireland since 2016. More than 23 per cent of asylum applications made so far this year have come from Albanian nationals, while Georgians account for nearly 15 per cent of claims.

This reflects a Europe-wide trend in rising numbers of asylum claims from these two countries. The European increase may in part be explained by the fact that Albanians and Georgians no longer need visas to enter the Schengen zone (an area comprising 26 European states that have officially abolished all passport and all other types of border control). However, they still require visas for Ireland, the UK and Denmark.

It is believed some Georgians and Albanians who seek asylum in Ireland are hoping to travel on to the UK, particularly ahead of Brexit. Many arrive as economic migrants and are not eligible for refugee status, but a small number, particularly those from the LGBT community, are fleeing persecution.

While Albania and Georgia are deemed “safe” countries by the Irish Government, a small number of Albanians do travel here with “completely legitimate” asylum claims, according to the previously mentioned legal source.

I’ve experienced normal life in Ireland, and I like it. Ireland made me find my true self

He says human trafficking remains a real problem in Albania, along with corruption and criminal activity. “These are genuine, real claims. There is no basis for this idea that they are all economic migrants.”

So far this year 23 Georgians have been removed from Ireland, up from two last year. The number of Albanians is fewer.

Two months on from receiving his deportation letter, Odiboh is becoming increasingly anxious about his future in this country. He has appealed the decision and is awaiting an answer.

“I’ve experienced normal life in Ireland, and I like it. Ireland made me find my true self, my originality in my art, literature and theatre. It has given me peace, security, safety and the ability to have a meaningful and purposeful life.

“This deportation order is taking life out of me. It takes everything meaningful away from me... I beg, and plead with my life, my heart, body and soul to be allowed to remain here in this safe and secure nation.”