What’s the deal with the O’Devaney Gardens redevelopment?

Q&A: The council has agreed a deal with Bartra for regeneration of the derelict flats 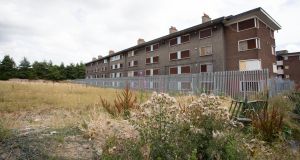 What and where is O’Devaney Gardens?

O’Devaney Gardens was a social housing complex of 278 flats built in the 1950s close to the Phoenix Park in Dublin 7. It was once home to more than 1,000 people. The council began moving tenants out around 15 years ago in preparation for the estate’s demolition and redevelopment.

Did that plan go ahead?

No. In 2006 Dublin City Council finalised a public-private partnership deal with developer Bernard McNamara to redevelop the estate with a mix of more than 800 social and private homes. But, two years later, before construction had started, it became clear that property prices were dropping and the figures were not stacking up for the developer, with the profits from selling apartments not sufficient compensation for the cost of providing social housing, and he pulled out.

Did the council just keep the flats as they were?

By the time the deal had collapsed, most the flats had been emptied and the estate had become a magnet for crime and vandalism. The empty flats were repeatedly set ablaze, so the council decided it had to go ahead with the demolition.

What has happened over the last decade?

The council came up with new plans for the estate, and did get permission for the first phase of 60 social and 50 private apartments and houses in 2011 from An Bord Pleanála, but the following year it conceded it could not secure the €32 million needed and shelved the project.

In 2015 the council came up with a new plan: its “vacant land initiative” to develop council-owned sites for social, affordable and private housing. In January 2017, following two years of negotiations between council officials, the Department of Housing and city councillors, 53 of the 63 city councillors voted in favour of a 50 per cent private, 30 per cent social, and 20 per cent affordable housing mix on the sites including O’Devaney Gardens. The deal was championed by Sinn Féin, which was the largest party on the council at the time.

Why didn’t that development go ahead?

The public procurement process to select a developer to build anything takes an unearthly length of time. This September the council announced Bartra had put forward the best bid to redevelop O’Devaney Gardens. At this stage the local elections were over, and a new council was in place.

Had the wheels of the procurement process not ground so slowly, the developer would have been chosen before the elections and there is every possibility that councillors would have been crowing on the canvass about how they had secured the redevelopment of O’Devaney Gardens.

Sinn Féin seems to be leading the charge against the deal – why?

The scheme remains as it was when Sinn Féin voted for it in January 2017. However, the party’s argument now is that they do not like the specific deal done with Bartra, because they say it does not represent good value for money. They have also changed their mind about the mix of housing they want on the land, saying now that it should be 33 per cent social, 33 per cent affordable rental and 33 per cent affordable purchase.

Has the deal with Bartra now collapsed?

No. On November 4th the councillors approved the Bartra deal based on the January 2017 scheme for a 50 per cent private, 30 per cent social, and 20 per cent affordable housing mix.

Then why is it back in the news?

The councillors were originally asked to approve the disposal of the site to Bartra in October, but deferred the decision to try to secure a new deal with Bartra. On November 4th, before the meeting, the new grouping of “ruling” parties on the council – Fianna Fáil, Labour, Social Democrats and Greens, known as the “Dublin Agreement Group” – released a statement saying they had “secured a commitment” from Bartra that it would sell 30 per cent of the homes to the council or a nominated housing body for use for affordable rental.

Has Bartra agreed to this?

On November 6th, Minister for Housing Eoghan Murphy wrote to Lord Mayor Paul McAuliffe to reiterate his position that he would be providing funding to the project based on the 50 per cent private, 30 per cent social and 20 per cent affordable housing mix, and noting that councillors had voted in favour of this on November 4th. He said he was concerned the Dublin Agreement Group’s statement in relation to the 30 per cent affordable rental may have caused “confusion” because he said there was “no new agreement between Dublin City Council and Bartra”.

So, is the deal for the regeneration of O’Devaney Gardens going to collapse again?

This is very unlikely. Councillors voted for the disposal of the site to Bartra, so their role is effectively over. It is now up to the management of the council to execute the deal and oversee the development of the site.