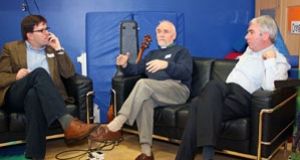 LP Hartley wrote in his 1953 novel The Go-Between that “the past is a foreign country: they do things differently there”.

Increasingly Northern Ireland is becoming a foreign "country" where the Republic is concerned and inevitably, being the North, this is driven by religion – Protestantism in particular, and of a more fundamentalist variety.

It also led the Presbyterian Church’s General Assembly in Belfast last year to loosen ties with its mother church, the Church of Scotland, because of a perception that the latter had become too liberal on same-sex issues. It also decided then that same-sex Presbyterian couples could no longer be full members, nor could their children be baptised.

As with the Presbyterian church on this island, within the Church of Ireland this spreading fundamentalism is leading to a hardening border between more liberal followers in the Republic and those increasingly more rigid in the North.

Contributing to this within the Church of Ireland has been growth in the North and along border areas over recent years of two fundamentalist movements, Gafcon and New Wine Ireland, with considerable overlap between the two.

Gafcon (the Global Anglican Future Conference) was set up in 2008 as a response to the election in the US Episcopal Church (Anglican) five years previously of the openly gay Gene Robinson as bishop of New Hampshire.

Gafcon is described on its website as “steadfastly orthodox” and “a Bible-based movement which submits to the authority of the scripture”.

An interim report last June, from its task force on women bishops, advised: “It is our prime recommendation that the provinces of Gafcon should retain the historic practice of the consecration only of men as bishops until and unless a strong consensus to change emerges after prayer, consultation and continued study of scripture among the Gafcon fellowship.”

Since 1990, women have been eligible for ordination as bishops, as well as priests, in the Church of Ireland. In 2013, Most Rev Patricia Storey was consecrated as the first female bishop in Ireland, in the diocese of Meath and Kildare.

Internationally, membership of Gafcon includes Anglican primates from some African countries as well as those bishops and clergy from Australia, Canada and the US who boycotted the last gathering of the worldwide Anglican Communion at Lambeth in 2008.

Gafcon Ireland was launched in Belfast in April of last year, where it was noted that “the Church of Ireland has followed many in the Anglican Communion into a confused collection of opposing ‘theological traditions’”.

Its website is critical of two Church of Ireland bishops who publicly supported the Yes campaign for same-sex marriage in 2015. In November of last year, it objected to Dr Amal Abdullah al-Qubaisi being allowed give an address in Waterford’s Church of Ireland Christ Church Cathedral.

Dr al-Qubaisi was then president of the Federal National Council of the United Arab Emirates, and the first senior Arab Muslim politician to give an address from a Christian pulpit in Ireland.

Gafcon said that allowing her do so gave a “misleading impression that the Bible and the Koran are different books by the same author”. It also objected to “leaders of other faiths” being allowed speak in St Anne’s Church of Ireland Cathedral in Belfast.

Gafcon’s Jerusalem meeting last year was attended by the recently retired Bishop of Down and Dromore Harold Miller and the current Bishop of Elphin, Kilmore and Ardagh Ferran Glenfield. Bishop Miller’s recently elected successor, Archdeacon David McClay, is a member of Gafcon. He is also chair of the similarly minded New Wine Ireland, of which his wife Hilary is a director.

The Church of Ireland Bishop-elect of Derry and Raphoe Andrew Forster, who is to be installed next month, last week chaired a discussion involving Archdeacon McClay at an event co-hosted by New Wine Ireland at Willowfield Church in Belfast, at which the archdeacon is rector. Willowfield is described on its website as “a New Wine resource church”.

New Wine Ireland’s “network leaders” include Rev Isaac Hanna, rector of Drumcliffe, Lissadell and Munninane in Co Sligo and the Bishop Ferran Glenfield of the diocese of Elphin, Kilmore and Ardagh.

There have been sustained protests from members of Rev Hanna’s congregations in recent weeks since he removed from a church position a parishioner who married his same-sex partner a short time ago.

Another of New Wine Ireland’s network leaders is Rev Alison Calvin, rector of Killeshandra, Killegar and Derrylane in Co Cavan.

Speaking at the church’s 2017 general synod in Dublin, against a motion that the bishops consider preparing a public thanksgiving service for legally married same-sex couples, she explained how, at times “I feel I am being bullied. It’s not fair that my deeply held convictions are portrayed as those of a narrow-minded bigot.”

The motion was defeated.