Refugee convention at risk of ‘collapsing’ due to toxic rhetoric, says UN chief 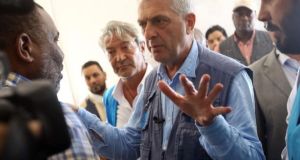 Filippo Grandi, the UN High Commissioner for Refugees, warned the political response to the refugee crisis was allowing “abuses of human rights to be carried out unchecked”. Photograph: Mahmud Turkia/AFP/Getty

The 1951 refugee convention, which protects the basic human rights of refugees and asylum seekers, is at risk of “collapsing” or being “fatally weakened” if the toxic rhetoric from rich nations towards migrants continues, the UN High Commissioner for Refugees has said.

Speaking in Belfast at the Global Conflict conference in Queen’s University, Filippo Grandi warned that the political response to the refugee crisis was allowing “abuses of human rights to be carried out unchecked, unmonitored and uncontained”. These flaws in the system continue to be exploited by smugglers and criminal groups who take advantage of people fleeing war and conflict, he said.

Mr Grandi also called for perspective in the debate around the European “refugee emergency”, saying a very small percentage of the 65.8 million displaced people worldwide actually end up in the European Union.

“Eighty-five per cent of refugees are in poor- or middle-income countries. That’s where the emergency is. I’m not underestimating how problematic and challenging it is to deal with forced displacement into the rich world. But the real problem is where the resources are scarce.

“We’re faced with 60,000 arrivals across the Mediterranean into a continent of half a billion people, the richest continent in the world and it’s portrayed as an emergency. We’re seeing increasing restrictions in asylum practice, we see pressure for premature returns and we see situations of great danger for refugees. There is a real threat the 1951 system may collapse or fatally weaken.”

Maciej Popowski from the European Commission, who also spoke at the conference organised in collaboration with the University of Chicago, reflected on the success of the EU-Turkey deal in stemming the number of asylum seekers arriving on European shores.

However, he was challenged by an audience member who spoke of the inhumane treatment of African migrants caught up in Libyan detention centres and asked why the commission had opted to provide financial support to the Libyan coastguard and detention centres.

Mr Popowski responded that the commission was focused on improving the conditions in Libya’s reception facilities. “The problem is the [Libyan] government is not always willing to engage. We’re trying to make progress. We’ve offered some training to the coastguard so that they treat people in a more humane way.”

Sanj Srikanthan, from the International Rescue Committee, highlighted the vital role women in conflict situations can play in restoring peace to their communities. The decision to focus humanitarian projects on women and girls has created a “global shift” in how NGOs support and strengthen families caught up in violence, he said.

“Women and girls are not vulnerable. We put them in vulnerable situations and that is the difference. We find that strengthening the family unit means focusing on women and girls. Women are often the drivers.”

Cash programmes which see money being handed over to women rather than their male partners have also proven hugely successful in providing aid to families, he added.

Even when conflict is resolved, countless women continue to suffer violence in the privacy of their own homes, said Dominic MacSorley, chief executive of Concern Worldwide. “For women the war does not end when the violence ends. It’s brought home by the impact it’s having on men either through helplessness or powerlessness and violence is perpetuated. Conflict erodes self-esteem and confidence.”

Anne Richard, the former US assistant secretary of state, population, refugees and migration, said immigration policies implemented by the Trump administration had broken with decades of US support for refugees. “Since the 1980s we’ve had a network of organisations working at local levels to help refugees in a very pragmatic way to start their lives in United States. Not only are numbers going down but this tradition is being disrupted and the network that helps refugees is disintegrating.

“People who are migrating should be treated with dignity when they’re stopped, when their papers are checked . . . I’m shocked by the extent that the Trump administration has been able to do so much damage in such a short period of time.”

Gardaí expected to upgrade investigation into man’s death to murder inquiry 01:45
Private consultants say they are ‘100% committed to fight against Covid-19’ 01:00
Donations of masks, gloves and sanitiser flood in for Derry health workers 01:00
Coronavirus: Public urged to stay at home for Easter 00:23
Keeping their distance: Enclosed nuns attract followers via online Mass 00:10