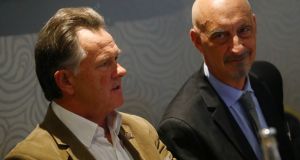 Clerical sex abuse is “a global problem” requiring “a global solution”, a worldwide group of abuse victims meeting in Dublin has said. End Clergy Abuse, which represents clerical abuse survivors and activists, called on Pope Francis to follow the example of survivors who have come forward and take action to name clerical sex abusers and hold bishops who covered it up to account.

The group wants the pope to bring zero tolerance of clerical sex abuse into force under church law, remove from office bishops who covered up sex crimes by clergy, and publish a global registry of confirmed clerical abusers held by the Vatican.

“The time of words should be over and the time of action should start now,” Matthias Katsch, an abuse survivor from Germany, told a press conference on the eve of the pope’s arrival in Ireland for a 36-hour visit, the first by a pontiff since 1979.

Clerical abuse victims and campaigners from Ireland, the UK, Belgium and the US came together in Dublin for only the second meeting of global campaigners. They spoke to reporters near the Catholic Church’s World Meeting of Families at the RDS where they were earlier invited to listen to a panel discussion on “Safeguarding Children and Vulnerable Adults” and the Vatican’s response to the latest allegations of clerical child sex abuse and cover-up by the church.

“We didn’t hear anything today how they are going to change how they are doing their job – nothing,” said US survivor Peter Isely, who was sexually assaulted as a child in Milwaukee, Wisconsin.

He said the pope’s Vatican panel set up by Francis in 2014 to address clerical sex abuse had “simply failed” as a mechanism to deal with clerical sex abuse. He called on Cardinal Sean O’Malley, Archbishop of Boston who heads the Pontifical Commission for the Protection of Minors, to take a leave of absence.

Francis will meet clerical abuse survivors during his visit which concludes the World Meeting of Families, the once-every-three-year event held to energise Catholics. Cardinal O’Malley withdrew as chairman of Friday’s panel discussion on safeguarding children at the pastoral congress after allegations abuse emerged at a seminary in Boston.

Mr Isely suggested Archbishop Diarmuid Martin of Dublin had the “qualities that might be needed” to replace Cardinal O’Malley as head of the Vatican’s child protection commission given how he voluntarily handed over Archdiocesan records on abusing priests to the civil authorities and enacted zero tolerance for abusive priests.

He praised Archbishop Martin for pointing out, days before the pope’s visit, the systemic problems within the church that had prevented the Vatican from definitively addressing the prevention and reporting of clerical sex abuse.

Peter Saunders, a British abuse survivor, held up a newspaper front page at the press conference that reported on Archbishop Martin saying two days earlier that the number of abuse victims was “immense”.

“That is something of a revelation of the honesty of that man and not something that we come across in our work with any of these institutions,” he said. He rejected a view within the Catholic Church shared by a young bishop he spoke to that abuse was historic.

“It is something that is still alive and festering and kicking today,” said Mr Saunders, who was abused by two Jesuit priests at his school in London.

American Tom Doyle, a church whistleblower who is no longer an active Dominican priest and who now serves as expert witness in clerical sex abuse cases as a canon lawyer, said the Vatican was “stonewalling” the courts of justice in abuse cases and that the Vatican would change only through court actions.

“All the advances we have made, all the justice we have seen has taken place in the civil courts and not in the halls of the Vatican,” said Mr Doyle. “They are definitely afraid of that and if that keeps going and strengthens, then you will see change forced on that system, not done voluntarily.”

Mr Isely told The Irish Times that victims were suffering from “apology fatigue” and wanted action from the pope. He welcomed his meeting survivors in Dublin but said a public meeting was needed to break the “circle of secrecy”. Mr Saunders said the survivors meeting the pope should point out his inaction. “This pope is very, very slick on PR. He is very good at putting his thumbs up to the camera and kissing babies, but on the issue of the abuse of children, he has been strangely and tragically inactive,” he said. “He needs to be told that.”