Dog ‘thrown out’ onto M50 is an unusual case, DSPCA says 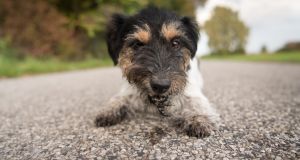 The case of a dog abandoned on the M50 is “unusual,” the Dublin Society for the Prevention of Cruelty to Animals (DSPCA) has said.

The dog, a terrier cross now called Tina, was left on the hard shoulder near the Red Cow junction on Thursday.

“It’s very unusual to see a dog being thrown out on a motorway,” Brian Gillen, chief executive of the DSPCA, said.

“This method of abandonment is a rare occurrence.”

Puppies put in a bag and thrown in skips, and horses left to roam forests were other rare abandonment cases, he said.

Despite these instances, the rate of pets being abandoned has dropped significantly in the last decade, with an 80 per cent reduction in the numbers taken into pounds.

Mr Gillen said the reduction was due to an increase in education about pet ownership and the benefits of adopting a rescue.

“There’s more of an awareness of responsible ownership and what’s involved in that, and that’s coming from education” he said.

A common method of abandonment is for people to leave their pets tied to the gates of rescue shelters, and occasionally outside supermarkets.

“We’ve had dogs tied to the gate of this place, people will just come up in the night and tie their dog to the gate” Mr Gillen said.

He said people were reluctant to bring their unwanted dogs to pounds, as there was an idea that pounds put down huge numbers of dogs every year.

Mr Moroney said that this was not true.

“People have a perception that pounds are a death warrant for dogs. It’s not. We had 96 per cent re-homing from here last year” he said.

He said the other 4 per cent of the dogs have to be put down due to issues relating to old age, illness, and aggression.

Mr Moroney said much of this perception comes from the “five day rule”.

He said a common misconception is that dogs in pounds are put down after five days. In reality, the law is that a pound must hold on to a dog for minimum five days before re-homing it.

The DSPCA is appealing for anyone with information on who may have abandoned Tina the Terrier on Thursday to come forward.