Pope in Ireland: field hospital to be ‘best staffed emergency department in the country’ 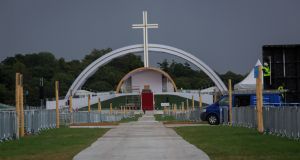 Cross in the Phoenix Park in Dublin where Pope Francis will say Mass on Sunday. Photograph: Gareth Chaney/Collins

The field hospital being set up in the Phoenix Park for the Pope’s Mass will be the “best staffed emergency department in the country on Sunday”, the medical director for the event has said.

Former head of the Emergency Department in James Hospital in Dublin Dr Patrick Plunkett said he acknowledged there had been poor communication about plans , but said there had been a complete change since he took over the position on Monday.

“ I hadn’t been involved in the preparation before, there was a lot of preparation done, but there was a different model of care, which was only to deal with resuscitation in the Park, and to move everything else out, that’s been changed completely” he said.

“We now have a field hospital, we now have 30 doctors in there, we have 30 nurses - we will be the best staffed emergency department in the country on Sunday.”

Dr Plunkett said the Irish Association for Emergency Medicine, which had expressed concern, was “now much more comfortable with the arrangements that they are aware of, they weren’t aware of them before”.

He said “anybody who manages to walk in must be quite fit, the shortest walk is 2.5 km, the longest 6.4km, that distance for someone like me would take a little bit over an hour, for an older person it might take an hour and a half, maybe two hours to get in, they will then be standing for potentially eight hours, there are no seats,”

Dr Plunkett said his advice for the day was “good footwear, rain gear, sun hat, food and water, look after yourself”.

Brenda Drumm, communications officer with the World Meeting of Families, said she did not want people, particularly the aged and those who suffer poor mobility “ to be disappointed”.

While mobility scooters were banned for the papal Mass, each corral for the routes had space for wheelchairs “up the front”, she said.

There was also a designated access for wheelchair users and special access arrangements have been available on the World Meeting of Families website for people when booking, she told RTÉ Radio 1’s Morning Ireland . She also said there would be 10,000 volunteers available to help get people in and out of the park .

Asked by The Irish Times for details on the location and number of first aid stations Ms Drumm said this was essentially a matter for the HSE and the volunteer service providers, before adding that such information may be available in map form, later on Friday.

The Order of Malta’s said more than 550 volunteers would be working at papal events “not just here but in Knock as well”, made up from the Knights of Malta, the Red Cross, St John’s Ambulance and the Civil Defence, all coordinating with the HSE. For the papal Mass the numbers would increase dramatically and the Order of Malta alone would have some 200 volunteers.

Crowds will be brought in through separate routes to corrals, in groups of 50 or 100 up to 3,000 people in a grid lay out.

“Spotters” will be on elevated heights with first responders and paramedics on the ground.

The four voluntary emergency societies - St John Ambulance, Order of Malta Ireland, Red Cross and Civil Defence - will each have 35 flags on two metre poles and spotters will guide the services to incidents .