Abuse victims ‘don’t need a letter from the pope to know this is a reality’, says survivor Marie Collins

Speaking at the World Meeting of Families, Marie Collins, a former member of the Pontifical Commission for the Protection of Minors set up by Pope Francis, noted the Pope’s letter to all Catholics earlier this week. Video: Simon Carswell 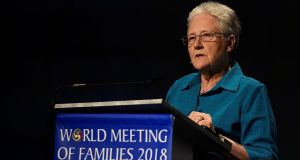 Abuse survivor Marie Collins takes part in a panel meeting on the safeguarding of children and vulnerable adults at the Pastoral Congress at the World Meeting of Families in Dublin, Ireland August 24th, 2018. Photograph: Clodagh Kilcoyne/Reuters

The fear of a “domino effect” and how deep and wide the clerical abuse scandal goes is behind the Catholic Church’s reluctance to investigate it properly, Irish clerical abuse survivor Marie Collins has said.

Speaking to reporters at the World Meeting of Families pastoral congress in Dublin, the campaigner said: “Every report that we have seen, every investigation there’s been has shown that the Church acted to protect itself, to protect the institution, to protect its reputation.

“I do believe it is absolutely a reluctance to look into things properly and to behave properly is the fear of how deep this goes, how far it goes and how wide it goes.”

Ms Collins said there was a “mistaken idea” within the Church that “if we don’t look at it, it will all go away”.

“There is this fear of the domino effect, that if you start looking at bishops and they start being removed, how many more will it effect down the line. It shouldn’t matter,” she said.

“Every rotten apple should be got rid of and it should happen now.”

Ms Collins said that the “denial is there; it is not imaginary.”

Deniers “go along with the myth” that abuse is down to homosexual priests or to media campaign or they think that campaigners like her are “enemies of the Church and want to destroy the Church,” she said.

“It is more comfortable to think that,” she said.

The panel told reporters afterwards that they did not know the names of the people within the Vatican who are resisting the investigations and disclosure of clerical sex abuse.

Prof Gabriel Dy-Liacco, a member of the Pontifical Commission for the Protection of Minors from the Philippines, said there needed to be a change in culture in the Church.

“If it is not changed, this is going to continue,” he said.

Addressing the World Meeting of Families, Ms Collins, a former member of the Pontifical Commission for the Protection of Minors set up by Pope Francis, noted the Pope’s letter to all Catholics earlier this week acknowledging the Church’s failures to safeguard children from clerical abuse.

“Survivors and victims of abuse don’t need a letter from the pope to know this is a reality - we have been speaking about it for decades,” she said.

“Sadly, still in the church among clergy and laity there are people who prefer to believe that all this is a media conspiracy, just survivors trying to destroy the church and they deny and they defend.”

In her presentation to a panel discussion entitled “Safeguarding Children and Vulnerable Adult” at the congress in the RDS, Ms Collins said she hoped that if Catholic clerical abuse deniers would not believe survivors, then they would at least believe the pope who wrote this week to every Catholic.

“I hope that they will take their energies from defending the indefensible, accept the truth, and instead of denial, put their energy into bringing changes that are needed,” she said.

Cardinal Sean O’Malley, Archbishop of Boston, was due to have chaired the panel discussion but withdrew from the Dublin conference after of allegations abuse emerged at a seminary in Boston.

He was the second US cardinal to withdraw from the World Meeting of Families after Cardinal Donald Wuerl, Archbishop of Washington, pulled out of the Dublin after he was heavily criticised for his handling of child sexual abuse allegations in a Pennsylvania grand jury report.

Baroness Prof Sheila Hollins, a former member of the Pontifical Commission for the Protection of Minors England, who chaired the discussion in Cardinal O’Malley’s absence, said that more clerical abuse victims were afraid of coming forward “because of a fear of not being believed”.

“It is time to turn words into action. We want to help turn your anger into action and hope. We hope you will be able to receive the support and help that you need now and into the future,” she told them.

Prof Hollins read out a letter from Cardinal O’Malley in which he said the Church in the United States again finds itself “confronted with the tragic history of child abuse and betrayal in our church”.

“Our response must always be one of contrition, penitence and conversion. Recent events only underscore the fact that the subject matter entrusted to this panel is the most crucial issue facing our church,” said Cardinal O’Malley in his letter.

“All endeavours and evangelisation and other kind works will be dependent upon our ability to own our tribe’s failures and to make the protection of children and vulnerable adults our number one priority.

“The crucial role of the laity cannot be understated as we look for the path forward.”

Addressing the Catholic conference that champions the importance of family, Ms Collins called on all Catholic families to “raise their voices and call for the church to protect children, the heart of the family.”

“It is a duty to speak up and to seek assurance that there is no place in the Catholic Church for anyone who had hurt a child or a vulnerable adult, or for anyone who would protect such a predator,” she said.

Ms Collins was appointed by Pope Francis to the Holy See’s commission to protect minors in 2014 but resigned in 2017 in frustration at the failure of the Vatican to respond to letters from abuse survivors.

In her speech at the Catholic conference, she called for the Vatican to implement “the strongest possible safeguarding policies with the strength of canon law behind them” in every diocese around the world.

“Every child is equally precious where he or she lives should not decide whether they will be safe or left at risk. So why is this not being done?” she asked.

She questioned why the United States was the only country where the church has made mandatory reporting in force in canon law.

The Church must also introduce “robust structures” in place to hold accountable those in leadership who protect a predator not only leadership positions in dioceses “but in the Vatican itself.”

“Anyone who would stand in the way of proper protection of children should be accountable as well,” she said.

Three years ago the Pontifical commission recommended the establishment of a court to make strong sanctions against sexual abusers including their dismissal, and their removal from the church if necessary, she said. “It never happened and I think people should be asking why not,” she added.

She said the church on one hand claims “to be on the side of the victims and survivors” but was fighting against the removal of statute of limitations that would prevent the prosecution of abusers.

“The actions of the church do not match the words and in fact they are totally the opposite. I would say why is this being allowed to happen,” she said.

The Church should introduce “real zero tolerance” to have a priest removed as soon as allegations of abuse are made known and “if canon law doesn’t allow that to happen then write a new canon law.”

“Sadly, canon law has been more often used to protect the abuser than to punish him,” she said.

Ms Collins’s call was one of several of her statements applauded during an eight-minute address.

She said that the Vatican must stop using the “papal secret” - a code of confidentiality that applies under canon law - that has been used to stop bishops reporting abusing priests to police.

“It is being used to restrict victims from their legal rights to information, legal files,” she said.

She called on the church to “explain why these changes aren’t being made and to make children safer.”

“Every child in the world should be safeguarded equally,” she said. “Everyone in the church will now start asking the questions of the leadership as to why none of this is happening.”

Another speaker on the panel, Barbara Thorp, social worker, former head of the Office for Pastoral Support and Child Protection, praised Ms Collins saying her leadership over the years was “extraordinary.”

“Her voice in these days has never been stronger, never been truer and never been more needed,” she said.

Prof Hollins said that structural changes in the Church were not welcome by some because there was “still considerable denial about the extent and nature of the problem in many countries.”

“The truth is that abuse happens everywhere,” she said.