Papal visit: Being young and Catholic can feel like ‘swimming against the tide’ 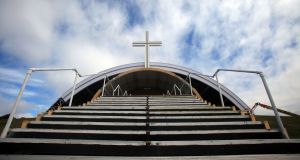 The Papal Cross in the Phoenix Park in Dublin where some 500,000 people are to attend a Mass celebrated by Pope Francis on Sunday as part of the World Meeting of Families. Photograph: Garrett White/Collins.

Niall Buckley is volunteering as a translator during the World Meeting of Families, the main event of which is the visit of Pope Francis and a papal Mass that some 500,000 are due to attend in Dublin’s Phoenix Park on Sunday.

The 21-year-old, who attends Mass four to seven times a week, says his faith is “key, it’s pivotal, it’s the lens though which you view the world”.

The last Census, carried out by the Central Statistics Office in 2016, shows Ireland remains a predominantly Catholic place – with 78.3 per cent of respondents identifying as Catholics (down from 84.2 per cent five years earlier).

“I certainly see that being a practising Catholic would be somehow swimming against the tide,” says Buckley, who is from Co Kerry. “You can certainly empathise with the Apostles and the atmosphere and difficulties they had to go through in the early days.”

Young people have been credited in recent years with playing a major role in driving social change in Ireland. Referendums on allowing same sex marriage and liberalising the law on abortion have been carried.

Stories of people in their 20s and 30s coming home to vote in droves will long be remembered as important to the campaigns, the outcomes of which were regarded as major blows to the church’s authority in the State.

The 2016 Census found the number declaring “no religion” on their form had reached a high point, at 10 per cent, and a European Social Survey from the same year shows a more pronounced change among 16- to 29-year-olds, with 39 per cent saying they have no religion.

Much has changed here since the last papal visit in 1979.

Tamara O’Donoghue Cope (20), an agnostic from Co Galway, says she was eight years old when “I made the decision myself that God is not something that I believe in”.

She says a major factor in this was how forcefully religion was pushed on primary school children.

Tipperary-man Conor Duffy (23) says it was a greater understanding of science that turned him on to atheism at 17.

“As I studied more science and came to understand more about evolution and cosmology, I came to the understanding that there was no requirement for a supernatural force to have created life and the universe,” he says.

Gavin Boyne (20) became an atheist at around the same stage of his life as Duffy, when he began to question his faith and some of the teachings of the church.

However, the Dubliner is not convinced that the decline of religion in society is a good thing.

“Ultimately, I see this decline of religion and religious values is going to lead to a widespread social decay, rendering Ireland as a far worse off place than when the church had slightly more power than it does now”.

Duffy believes that the church spent years stagnating social attitudes in Ireland, and that its decline will benefit Irish society.

“To my mind this is a very positive change, and I believe the decline of religion is being accompanied by an increase in the moral character of Irish society”.

But even among those who do not subscribe to Catholicism, the reaction to the visit of the pope is generally positive.

O’Donoghue Cope says she thinks the World Meeting of Families is “a great opportunity for religious people to meet someone that they see as a pillar of their community”.

Boyne’s only complaint is that the amount being spent to facilitate the papal visit is too much.

One of those looking forward to the papal visit is Máiread Fallon (20) from Dublin, who says “religion is really, really important in my life. It’s the backbone of everything.”

She says faith is a source of comfort and stability, especially in trying times. When her father was diagnosed with cancer, a belief in God helped her and her family.

“My faith was always there, that was the one constant and it helped me through it all”.

Deirdre Chambers, a 23-year-old from Co Mayo, says that even the little stresses of life are worth praying about.

“My faith is very important to me. I’m a worrier, so if something is bothering me, something that I can’t wholly control, praying helps me feel like I’m doing something about it. Also putting my worries in God’s hands helps me not have such fear”.

Buckley knows a lot of young people volunteering at the World Meeting of Families, and thinks the renewed interest in the faith is down to the differences between Pope Francis and his predecessor, Pope Benedict.

“He [Pope Benedict] had a very theological mind. But I think Pope Francis has a very pastoral mind and he’s bringing a new energy that a lot of young people can identify with”.

While church leaders lament the decline of religion among young people, Fallon thinks it might just be a blessing in disguise.

“I don’t necessarily think that’s a bad thing,” she says, “nowadays people can freely choose to go to Mass because they want to and not because their neighbours expect it of them”.