Confronting abuse ‘not the major subject’ of Pope’s visit 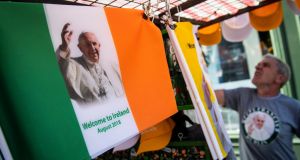 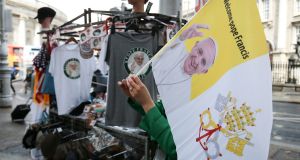 T-Shirts and flags of Pope Francis on sale in Dublin, ahead of this weekend’s visit by Pope Francis. Photograph: Aaron Chown/PA Wire 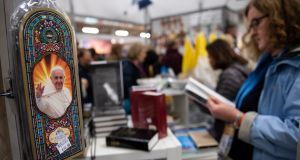 Memorabilia featuring the image of Pope Francis on sale at the Meeting of Families Pastoral Congress in Dublin. Photograph: Will Oliver/EPA

Confronting abuse within the Catholic Church is not the “major subject” of Pope Francis’ trip to the Republic, but he will nonetheless address the matter, according to Vatican spokesman Greg Burke.

The pontiff will arrive in Dublin on Saturday for a 36 hour visit to attend events of the World Meeting of Families. It is the first by a pontiff since John Paul II’s visit in 1979.

“It’s clear that it’s impossible go to Ireland, after these decades – not just these recent years – these decades, without addressing the issue, and the Pope certainly will,” Mr Burke told RTÉ News.

“I think he’s well aware of the situation in Ireland and having listened to a lot of victims he comes knowing and feeling their pain.”

In a letter issued to all Catholics on Monday, Pope Francis said the church had not acted “in a timely matter” in relation to clerical sex abuse and expressed “shame and repentance” for the Catholic Church showing “no care for the little ones”. It was issued following the publication of a grand jury report in the US that found more than 300 priests abused more than 1,000 children.

Mr Burke said the issue of abuse in the church was a “cultural problem” that could not be changed during the course of the pontiff’s short visit. “I think in 36 hours - or 32 hours on the ground - it’s hard to change a culture,” he said.

“I think the first thing the Pope will do is to show the acknowledgement of that. In terms of moving to actions, that will happen. But it doesn’t happen overnight. And people know that. People know that in the church and they know that in society as well.”

In terms of concrete steps Pope Francis might take, Mr Burke said: “Let’s see what the Pope has to say. That’s really a key thing on this trip.

“I think there is so much apprehension on all Pope trips. Let’s at least first listen to the Pope. That in itself is an important part of this.”

Mr Burke added that Pope Francis is “well rested” and “excited” about the trip to Ireland.

Earlier on Friday, Irish clerical abuse survivor Marie Collins said the fear of a “domino effect” and how deep and wide the clerical abuse scandal goes is behind the Catholic Church’s reluctance to investigate it properly.

Speaking to reporters at the World Meeting of Families pastoral congress in Dublin, the campaigner said: “Every report that we have seen, every investigation there’s been has shown that the Church acted to protect itself, to protect the institution, to protect its reputation.

“I do believe it is absolutely a reluctance to look into things properly and to behave properly is the fear of how deep this goes, how far it goes and how wide it goes.”

Ms Collins said there was a “mistaken idea” within the Church that “if we don’t look at it, it will all go away”.

“There is this fear of the domino effect, that if you start looking at bishops and they start being removed, how many more will it down the line. It shouldn’t matter,” she said.

“Every rotten apple should be got rid of and it should happen now.”

Meanwhile a worldwide group of abuse victims meeting in Dublin has said clerical sex abuse is “a global problem” requiring “a global solution”. End Clergy Abuse, which represents clerical abuse survivors and activists, called on Pope Francis to follow the example of survivors who have come forward and take action to name clerical sex abusers and hold bishops who covered it up to account.

The group wants the pope to bring zero tolerance of clerical sex abuse into force under church law, remove from office bishops who covered up sex crimes by clergy, and publish a global registry of confirmed clerical abusers held by the Vatican.

“The time of words should be over and the time of action should start now,” Matthias Katsch, an abuse survivor from Germany, told a press conference.

Clerical abuse victims and campaigners from Ireland, the UK, Belgium and the US came together in Dublin for only the second meeting of global campaigners. They spoke to reporters near the Catholic Church’s World Meeting of Families at the RDS where they were earlier invited to listen to a panel discussion on “Safeguarding Children and Vulnerable Adults” and the Vatican’s response to the latest allegations of clerical child sex abuse and cover-up by the church.

1 Coronavirus: More ‘striking’ evidence BCG vaccine might protect against Covid-19
2 Boris Johnson moved to intensive care after coronavirus symptoms worsen
3 Genetics shed light on origins of Irish strains of Covid-19
4 Coronavirus: 16 more people have died in Republic as public urged to ‘have patience’
5 Irish doctors on getting Covid-19: ‘In 90 minutes, I deteriorated quite rapidly’
Real news has value SUBSCRIBE