‘I’m hoping I’ll be here for a while’: homeless mother-of-seven forced to move again 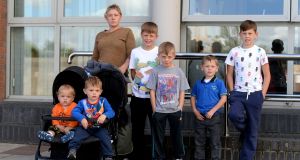 Margaret Cash (28) came to prominence after she circulated pictures of her children - aged between one and 11 years - sleeping on seats in Tallaght Garda station on social media. Photograph: Cyril Byrne/THE IRISH TIMES

A homeless woman who slept in a Garda station overnight alongside six of her seven children earlier this month has been placed in new emergency accommodation in the north inner city.

Margaret Cash (28) came to prominence after she circulated pictures of her children - aged between one and 11 years - sleeping on seats in Tallaght Garda station on social media.

Ms Cash, originally from Tallaght, had to leave a three-bedroom apartment on Parnell Street provided by the Dublin Region Homeless Executive (DRHE) with her children on Friday, and is now staying in a B&B in Drumcondra.

Ms Cash was initially told the property on Parnell Street would be for a week’s trial, followed by a month-on-month basis. However, the landlord of the property informed her the apartment was let out to students from September 2nd for nine months.

Dublin Region Homeless Executive (DRHE) said it had “no idea” the apartment was already booked from September.

“We took the apartment in absolute good faith, we were told it was available,” a spokeswoman said

Speaking to The Irish Times on Friday, Ms Cash said: “I’m hoping I’ll be here for a while that I don’t have to get up and move again. I haven’t been given any timeframe on it. I’m just taking every day as it comes.”

Ms Cash said she and her seven children are staying in two bedrooms with a small kitchen for cooking.

The DRHE said the emergency accommodation would be “on a temporary basis and will be ongoing”.

“It’s really unfortunate and awful that they have to move but we took it in good faith. We had no idea this was going to happen,” the spokeswoman added.

Ms Cash became homeless last September after the private house she was renting was repossessed. She has been living in emergency accommodation ever since.