An American trained and worked in Ireland; now she must leave 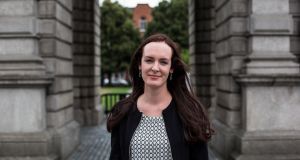 Chelsea Weaver: ‘The first time the plane landed it was like a massive exhale. This is where I’m meant to be for the rest of my life.’ Photograph: James Forde

Chelsea Weaver came to Ireland from Florida with only one ambition: to become a guidance counsellor and work here. Although none of her ancestors are from Ireland, the 29-year-old American has always felt drawn to the country.

“The first time the plane landed it was like a massive exhale. This is where I’m meant to be for the rest of my life.”

While Ms Weaver might see herself growing old here, she is now facing major obstacles to her plan.

She completed a Masters in Education (Guidance and Counselling) at Trinity College in 2016 and, since then, she has been working at Loreto College, St Stephen’s Green, Dublin, and was offered a permanent contract at the school.

Despite this, she’s been denied a work permit as well as a change of status to a Stamp 4 visa, which would allow her to continue working in the country. Now she’s expected to have left Ireland by September 1st, four days after her 30th birthday.

The reason? Non-EU citizens trained as guidance counsellors haven’t qualified for work permits since November 2014, a few months after Ms Weaver started her Masters here. The occupation was moved from the highly skilled eligible occupations list to the ineligible categories of employment list at that time.

“The reason jobs are on the ineligible list is because the Department [of Business, Enterprise and Innovation] believes there’s not a shortage in those areas. Now in this case it’s not true, there is a shortage of guidance counsellors and teachers in general,” she said.

When asked for comment, a spokesperson for the department stated, “Neither available research nor stakeholder input suggested that there was any shortage of guidance counsellors during that time or, indeed, during subsequent reviews.”

Ms Weaver’s dealings with Minister for Justice Charlie Flanagan and the department, which deals with work permit and visa issues, have proven less than fruitful.

“What I should have done, according to the department, was withdrawn from the course and requested my fees back, even though I have it in writing that I wouldn’t have received my fees back,” she said. “I think that’s just the most ridiculous thing to say to someone who’s just moved abroad and paid international student fees.”

The fees for the two-year Masters programme for non-EU citizens cost €17,000.

Fianna Fáil’s Justice spokesman, Jim O’Callaghan, has been in contact with Ms Weaver and has offered her advice on her situation.

In January, Ms Weaver was granted a temporary extension on a Stamp 1 visa by the Minister for Justice to allow her to finish out the school year at Loreto College without a work permit.

Her situation is unusual. She believes herself to be “the only non-EU person to train as a guidance counsellor here”. She believes the qualification is also next to useless outside Ireland.

“It qualifies you to work and it trains you to work as a guidance counsellor specifically in Ireland and nowhere else,” she said.

Not that she would want to work anywhere else. Her time at Loreto College has been, in every regard, a dream come true.

Jackie Dempsey, principal at Loreto College, said Ms Weaver’s departure would be a “huge loss” to the school. “I think what has happened is an absolute disgrace,” she added.

However, the Department of Business does review the ineligible categories of employment list from time to time.

Ms Weaver is hopeful that if the Department of Justice were to grant her an extension on her visa until the end of the year, there’s a chance that guidance counsellors might be removed from the list before she has to leave.

Legally she could go to court, but the odds are against her and the cost of losing, beyond the monetary aspect, would be a permanent ban from the country. That’s not something she wants to risk, but neither does she want to contemplate returning to the US after living here for five out of the past eight years.

“I wouldn’t be going back to a home. This is my home.”