Response should be to eliminate racism and inequality everywhere, Higgins says 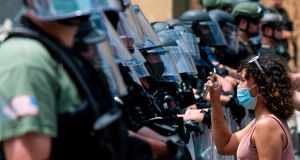 A protester shows a picture of George Floyd from her phone to a wall of security guards as she and others demonstrate near the White House, in Washington, DC, on Wednesday. Photograph: Jim Watson/AFP

President Michael D Higgins has expressed the “greatest heartbreak” at scenes of “military confrontation with peaceful protesters” in the United States.

The killing last week of George Floyd, an unarmed African-American man, by police in Minneapolis has sparked anti-racism protests, curfews and clashes across the country.

In a statement to The Irish Times, Mr Higgins said the response to the events in the US should be to eliminate racism and inequality everywhere.

Mr Higgins said when he first went to the US as a postgraduate student in the 1960s there was “an atmosphere of hope, an atmosphere of hope that after the war the gains of the civil rights movement, and the war on poverty which was getting under way, there would be a sustained movement forward towards achieving equality, an end to racist exclusion, and towards the fullest participation in American society”.

“To those of us who shared these hopes at that time, what we have been witnessing, including military confrontation with peaceful protesters, fills us not only with the greatest heartbreak but also with the conviction that we must all, in every circumstance, seek to eliminate any aspect of racism in our society, communities, in sport and in culture, and seek to eliminate the inequality that is often at its root.”

Tánaiste and Minister for Foreign Affairs Simon Coveney said he was “deeply concerned at underlying issues of racial inequality inspiring protests” in the US.

“Peaceful protest and robust independent media are essential for democracy. We must all be vigilant against scourge of racism. Violence is not the answer; community and political leadership is.” he said.

Speaking in the Dáil, Mr Coveney said he expected to speak to US ambassador to Ireland Edward Crawford in the next week but he warned that Ireland “should be credible” when speaking about racism and “need to focus on ourselves as well as looking critically at others”. The remarks came after the Dáil observed a minute’s silence against racism across the globe.

Meanwhile, a Black Lives Matter protest against racism that had been planned for Dublin next Monday has been cancelled. Organisers released a statement on social media on Wednesday saying the event had been cancelled over concerns that people involved may be prosecuted by the Garda.

An estimated 5,000 people took to the streets of Dublin on Monday for a mass Black Lives Matter protest. Gardaí were investigating the organisers of the protest, saying it was a breach of the Covid-19 regulations to organise such an event.

The Irish Council for Civil Liberties has said it was surprising the Garda had launched an investigation as protesting was a “fundamental right” and could be considered a “reasonable excuse” under the Covid-19 regulations. The council said anyone attending future protests should try to follow public-health advice.

However, Merj Ireland, which describes itself as “a group of migrants and ethnic minorities living in Ireland”, has said it plans to press ahead with a separate demonstration outside the US embassy in Dublin on Saturday. It has called on anyone living within 5km to attend for what it says will be a socially distanced event.

Meanwhile, several thousand people took part in a Black Lives Matter protest at City Hall in the centre of Belfast on Wednesday. There was some social distancing and many of the protesters wore face masks, but the crowd was often tightly packed together.

A virtual book of condolence has been opened in Derry and Dublin in memory of George Floyd.