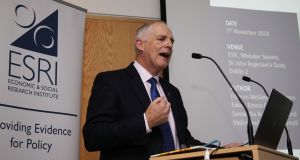 Minister of State for Equality, Immigration and Integration David Stanton: ‘This gives us a better understanding of who is more likely to face barriers to integration.’ File photograph: Nick Bradshaw

Many migrant groups have a higher education level, but a lower employment level than Irish-born citizens, new research by the State’s economic think tank finds.

According to the Economic and Social Research Institute (ESRI), most migrant groups of working age are more likely to hold a third-level qualification than people born in Ireland, of whom about 40 per cent have a qualification.

Despite this, many first-generation migrant groups have higher unemployment rates than respondents born in Ireland, with migrants from Africa having a particular disadvantage, the researchers found.

The study, which was funded by the Department of Justice, shows the difference between African-born and Irish-born people is linked to a higher unemployment rate among those with black ethnicity than those of white ethnicity.

Migrants from countries with a high rate of asylum applications to Ireland were found to have worse labour market outcomes, even after accounting for their education, English language skills, age, gender, ethnicity, nationality and duration of residence in Ireland.

The researchers believe this could be as a result of a number of factors, including the trauma and disruption experienced by protection applicants prior to and during migration, or time spent in the protection system, particularly if prolonged.

When employed, migrants from many Asian countries, as well as North America, are more likely to work in a professional or managerial job than those who are Irish-born.

Migrants born in EU countries have lower rates of unemployment than other migrants. However, among those who are working, EU migrants are less likely to work in high-skilled jobs.

Part of this difference is likely to be due to differences in the entry routes, as non-EU migrants who enter Ireland via the work permit system come to work in high-skilled jobs, while EU migrants have unrestricted access and do not need to be highly skilled.

Migrants with higher educational qualifications and better English language skills are less likely to be unemployed and more likely to be working in professional or managerial jobs.

Frances McGinnity, the author of the report, said the findings highlight the importance of English-language skills and of recognising foreign qualifications in the Irish labour market.

“They also suggest that those who have come through the protection system may need additional supports to integrate into the labour market. Measures to address ethnic discrimination in the labour market are also important,” Ms McGinnity said.

Publishing the report, David Stanton, Minister of State for Equality, Immigration and Integration, said it allows policymakers to “see how someone’s integration journey is influenced by their country of origin”.

“This gives us a better understanding of who is more likely to face barriers to integration, what these barriers are, and how to formulate effective policies to support people in overcoming them,” he added.