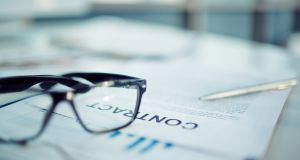 Some calls involved people having their pay reduced while working from home. Photograph: iStock

Queries about employment rights to free legal advice centres have almost doubled since the start of the pandemic.

Figures from the Free Legal Advice Centres (Flacs) and Community Law and Mediation (CLM) indicate a surge in the number of people concerned their employers have treated them illegally during the lockdown.

The CLM, which runs two community law centres, in Dublin and Limerick, has seen a 196 per cent increase in consultations since March on employment law – including breaches of contract, unequal treatment and difficulty accessing payments – compared with the same period last year.

Rose Wall, CLM chief executive, said the organisation had increased its usual four clinics a week to 11, by phone, in response to calls from workers.

Flac, which provides clinics across the State, said employment law queries accounted for 10 per cent of its calls in April 2019 but this doubled to 20 per cent last month.

In March it had 126 calls to its phone-in clinics about workers’ rights, rising to 180 in April.

Among its cases were: a woman who was asked to go on maternity leave early; people with underlying health conditions being told they must return to work despite their concerns for their own health; people being told to take paid annual leave, when they needed it for future commitments; and people being asked to resign as they could not work from home due to childcare problems.

Other significant calls included women returning from work after maternity leave, or who were about to take such leave.

Other queries were from workers feeling their employers had not taken sufficient health and safety measures, including a man who was told he had to travel for several hours with colleagues in a van, with no personal protective equipment provided.

Ms Wall said while the impact of coronavirus on businesses was “unprecedented”, it could not be used as a time to be lax about employees’ rights.

“People are feeling overwhelmed and vulnerable to the added complexities that Covid-19 brings to the workforce. With the number of people unemployed or supported under the temporary wage subsidy scheme now at about 1.1million, it is becoming increasingly difficult to challenge discrimination or mistreatment in the workplace.”

Eilis Barry, chief executive of Flac, said callers were “extremely stressed”. Both organisations said the number of employment-related calls was likely to increase as more people returned, or hoped to return, to work.

This underlined “the acute need for the availability and accessibility of legal advice, advocacy and legal aid during a crisis,” said Ms Barry, reiterating her call for a reform of the civil legal aid system.

“We must protect our workers and ensure that legal aid is accessible to all,” she said.

Employment rights are not currently covered by the civil legal aid scheme.

CLM has written to political parties involved in government-formation talks calling for prioritisation of reform of the civil legal aid scheme, including that workers have access to legal aid and representation in the Workplace Relations Commission.