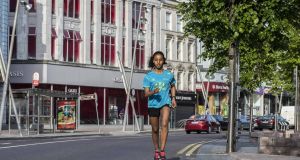 Hundreds of runners, including asylum seekers living in direct provision, took to streets around Ireland on Sunday morning to simultaneously run a leg of the Cork marathon, which was due to the take place this weekend.

Sanctuary Runners, the solidarity-through-sport movement which uses running to bring asylum seekers, refugees and members of wider Irish society together, had arranged for 1,000 runners to take part in the 2020 Cork city marathon.

However, when the marathon was cancelled because of Covid-19 restrictions, the Sanctuary group decided instead to hold a virtual marathon and encouraged members to run a short leg of the race within their 5km restriction while maintaining social distance with others.

The initiative, which seeks to highlight the 20-year anniversary of the direct provision system, included a four-person relay which took place on the streets of Cork city early on Sunday morning.

The runners – who are from Zimbabwe, Germany, Ethiopia and west Kerry – set off at 6am on Sunday and ran alone while ensuring handovers adhered to social distancing guidelines. They completed the race by running a newly created marathon route within their 5km radius.

Graham Clifford, founder of Sanctuary Runners, said the Cork relay team took “every possible precaution” and that while they couldn’t embrace at the end, “we got that same feeling of camaraderie knowing someone had crossed the finish line on Patrick Street on our behalf”.

Hana Fasika, an Ethiopian secondary school student living in Cork, said she was delighted to take part and that even though she was running alone she “knew there were so many people cheering me on in their hearts”.

Busie Mhlophe, a Zimbabwean resident of the Kinsale road direct provision centre, was running her third Cork city marathon as a member of Sanctuary Runners. “It was emotional, it was fun but most importantly it was a sign that no matter what, this community we have built, and are building, can endure anything.”

Niamh Ní Chonchuir, an occupational therapist from west Kerry but living in Cork, said Sunday’s run represented the “strength of the friendship, respect and solidarity” that exists within the Sanctuary Runners community. “It was hot out there, but I never felt alone. I knew that others were doing the same as me, safely, and that drove me on”.

Sanctuary runners was established in 2018 to enable Irish residents to run alongside, and in solidarity with, asylum seekers. As of the end of April there were 7,525 people (5,384 adults and 2,143 children) living in direct provision and emergency accommodation settings around the country.

Cowen ‘surprised and disappointed’ after being sacked on the phone by Micheál Martin 06:57
Taoiseach dramatically sacks Barry Cowen as minister over drink-driving controversy 07:14
Covid-19: Overseas visitors are causing ‘stress and anxiety’ in some areas, TDs say 05:10
Three visitors investigated by Garda after refusing to fill in locator form 04:45
Irish peacekeeping veterans sue the State over ambush of convoy in Syria 03:01