Catholic priests warn against any rush to reopen churches

Bishops are meeting this week to finalise plans 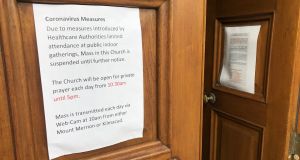 The Church of St Therese, Mount Merrion, in Dublin: the reopening of churches is currently set by the Government for July 20th. Photograph: Bryan O’Brien

The Association of Catholic Priests (ACP) has warned against any attempt to reopen churches before public health authorities deem it safe.

The organisation criticised “cultural warriors” who had sought to inject “narrow sectoral interests” in the debate over when Masses should resume. This, it said, “should bother all those committed to the principle of the ‘common good’, a principle integral to Catholic teaching”.

The organisation said “aligned, we are safer”, and it recommended priests avoid “the 3 Cs”, of “closed spaces, crowded spaces and close contact”, as advised by Trinity College Dublin immunologist Prof Luke O’Neill.

Fr Roy Donovan of the ACP leadership team said it was “very strong” on following the current Covid-19 guidelines “as advised by experts”. The association was, however, “open to further dialogue” on the reopening of churches – currently set by the Government for July 20th – and, in particular, on the conduct of funerals.

For bereaved families, funerals over recent weeks remained “unfinished business” with many left “very traumatised”. It had not been possible, for instance, to hold the usual month’s mind Masses, he said.

He recalled recently holding a prayer service in a graveyard at one family’s request to mark one month since their relative’s death. “They said it was very meaningful, even more meaningful [than a month’s mind Mass],” he said. Bereaved families had been “extremely helpful” to priests conducting funerals in the current circumstances, he said.

Fr Tim Hazelwood, also of the ACP leadership team, described as “appalling” some comments by Catholic activists and online “cultural warriors” who questioned the merits of closing churches in Ireland. This was particularly the case as so many priests in Ireland were in the vulnerable category where Covid-19 was concerned.

The average age of Irish Catholic priests today is 70, meaning a very significant number have been cocooning by Government direction over recent weeks.

The ACP, he said, was planning to launch a helpline for priests, most of whom lived alone and many who, particularly in rural areas, had become very isolated over recent weeks.

High on the agenda for the Irish Bishops’ Conference summer meeting this week will be planning the reopening of churches for public worship.

A general framework document for the entire Catholic Church in Ireland is being prepared. Before being authorised to reopen for public worship, each parish will be obliged to draw up a detailed plan following a specific checklist.

To mark Pentecost Sunday, a cross-denominational video involving more than 300 Irish church groups was launched on YouTube, dedicated to every healthcare worker on the island of Ireland dealing with Covid-19.

The Irish Blessing video was organised by Philip McKinley, former chaplain at Dublin City University and now in training for priesthood in the Church of Ireland, and Fr Martin Magill, parish priest at the Falls Road and Belfast.

Meanwhile, the new Moderator of the Presbyterian Church in Ireland, Rev Dr David Bruce, will become the 175th person to hold that office on Monday evening when he is installed in Belfast at a special live-streamed ceremony due to be attended by just four people, due to Covid-19 restrictions. As leader of the Presbyterian Church in Ireland, he will hold office for a year.